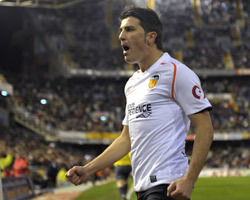 German captain Michael Ballack will MISS the World Cup due to the ankle injury he sustained during Saturday’s FA Cup Final -Outright betting.

Barcelona have signed David Villa from Primera Liga rivals Valencia in a deal worth €40million.

In the end they broke their own transfer record to sign Swedish forward Zlatan Ibrahimovic, but he has struggled to make the desired impact in Spain.

Barca have therefore turned their attention back to Villa, with an agreement now reached with the cash-strapped rivals.

The 28-year-old scored 107 goals in 166 league matches for Valencia after establishing himself with Real Zaragoza.

Villa, who has signed a four-year deal with Barca, will undergo a medical at Camp Nou on Friday before finalising his move.

After a board meeting at Valencia in the morning, Manuel Llorente, the president of the club known as “Los Che”, said they had accepted Barca’s offer.

“We have sold David Villa to Barcelona for 40 million euros,” he told a news conference at the Mestalla.

“As everyone knows we could have done this deal last year but we thought at that moment it was best to keep our squad together to try and get into the Champions League.

“We have achieved that aim and finished third in the league, and he has contributed a lot towards this. We think it is a good sale and necessary for the economic situation of the club.”

“The Spanish international is due in Barcelona on Thursday evening and will have a medical on Friday morning. Villa will then be officially unveiled as a Barca player.”

German captain Michael Ballack will MISS the World Cup due to the ankle injury he sustained during Saturday’s FA Cup Final -Outright betting.