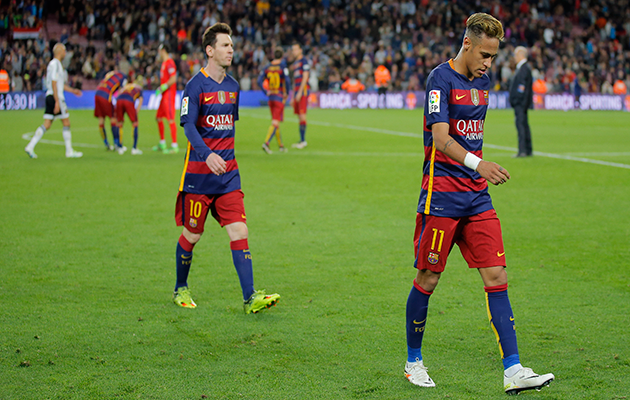 Barcelona forward Neymar Junior could be in trouble after he slapped Valencia right-back, Antonio Barragan, as the Catalan side slumped to their third successive league defeat.

A seemingly impregnable nine point lead has been squandered and the reigning La Liga champions, who were also knocked out of the Champions League last Wednesday, now sit level on points with their midweek conquerors, Atletico Madrid, and a point ahead of a resurgent Real Madrid.

To compound their recent slump, discipline within the side appears to be unravelling with Brazilian forward Neymar slapping Valencia’s Antonio Barragan after the duo were involved in a heated disagreement during the course of the game.

Barragan was furious with Neymar’s action and made an attempt to retaliate. However, the Valencia defender was held back by his teammates as the referee, David Fernandez Borbalan apparently missed the entire incident. The player, who had already been booked, could now face further disciplinary measures.

The Brazilian, reportedly, was also accused of throwing a water bottle at Barragan in the tunnel as both the set of players headed back to the dressing room. Neymar missed Barragan with the bottle.

Marca reported that during the incident, Neymar also shouted at the defender: “Shut up, I earn 10 times more than you!”

The sense that the club was struggling to come to terms with the adverse results, was not helped by the contemptuous response of coach Luis Enrique when he was asked whether the players’ physical fitness might be to blame for the recent poor sequence of results.

A journalist for the Diario Gol website, Victor Malo, asked the manager whether the physical preparation at the club might be to blame for the recent dip in form.

Luis Enrique responded by saying: “What was your surname?”

When the journalist replied “Malo” – meaning “bad” in Spanish – the manager said: “Correct, next question.”