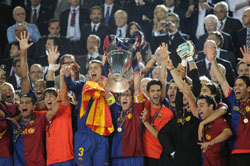 Barcelona ended Manchester United’s hopes of becoming the first team to retain the Champions League when they comfortably disposed of the holders in Rome.

United were beaten 2-0 courtesy of goals from Samuel Eto’o and Lionel Messi on a sweltering night in the Stadio Olimpico.

United started the final brightly with Cristiano Ronaldo a constant threat but were stunned on 10 minutes when Samuel Eto’o, supplied by the outstanding Andres Initesa, skipped past Nemanja Vidic and poked the ball past Edwin van der Sar.

The goal changed the course of the game and thereafter, Barcelona controlled possession and created the better chances on a night when most of United’s big guns simply did not perform.

Barcelona’s midfield pair of Iniesta and Xavi starved United of further opportunites to strike at a defence weakened by injuries and suspension.

Xavi hit the post with a free-kick and Thierry Henry was denied by Van der Sar from close range before Messi rose unchallenged to head home Xavi’s pinpoint cross past Van der Sar.

Much of the build-up to the game concerned the respective merits of Ronaldo and Messi, but it was the Argentinian who earned the plaudits after a wonderfully effective display. The Portuguese winger, who looked dangerous early on, became increasingly frustrated as the game progressed and was booked late on for barging into Barcelona skipper Carlos Puyol.

Once Josep Guardiola’s side had settled after the early goal, there was no way back for United who ended the game with four attackers on the pitch but rarely looked like breaching the makeshift Barcelona defence.

Ryan Giggs took the place of suspended Darren Fletcher in the United line-up – and for the first 10 minutes they pinned a nervous Barcelona back in their own half.

Ronaldo was then twice narrowly off target before Barcelona made their first attack into United territory. And it was to prove devastating as Iniesta strolled towards the edge of the area before releasing Eto’o. The Cameroon striker was allowed to cut inside Vidic before poking a shot past Van der Sar.

Rooney, of whom much was expected beforehand, was a peripheral figure for United and moved from the left to a central position before ending the match marooned on the right wing.

Ferguson brought on Carlos Tevez at half-time for the ineffective Anderson, a move that reflected United’s failure to create any chances.

However, the change brought no change to the flow of the game and indeed it was Barcelona who came closest to scoring when Thierry Henry outwitted Rio Ferdinand, only to be denied by the legs of Van der Sar.

Xavi then almost doubled Barcelona’s lead with a 20-yard free-kick following Vidic’s foul on Messi. He beat Van der Sar with his curling effort, but it rebounded off the post to safety.

Midway through the second half Dimitar Berbatov was summoned from the United bench, but within four minutes Barcelona deservedly went two up. Xavi collected a hacked clearance from Patrice Evra and sent over a wonderful cross to the unmarked Messi, who looped his header over Van der Sar.

United immediately responded but Valdes blocked at close range from Ronaldo, and thereafter it was Barcelona who looked more likely to add to their lead.

Van der Sar saved well from Puyol as Barcelona dominated until the final whistle and there can be few doubts that they were worthy winners. Pep Guardiola, in his first season in charge has set the bar high for his career in management, by adding the Champions League to the La Liga title and the Spanish Cup.