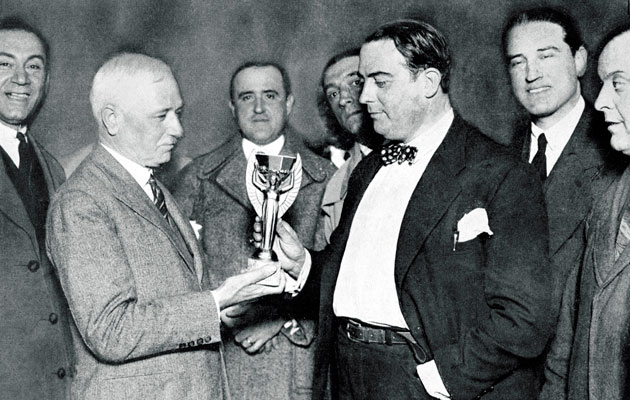 The stone base of the original World Cup trophy has been unearthed after a search of a basement storage unit at FIFA headquarters.

It will now be displayed in the new FIFA museum.

“It’s like finding an Egyptian mummy,” the museum’s creative director, David Ausseil said. “You can’t put a price tag on it because it’s family jewels.”

The base, a 10cm tall, octagonal piece of blue semi-precious stone, carries the names of the first two World Cup winners: Uruguay and Italy both of whom won twice between 1930 and 1950.

The trophy was given a new base before the 1954 tournament, won by West Germany.

The famous gold trophy was permanently given to Brazil after they won their third title in 1970. It was stolen in 1983 and never recovered. Rumours suggest the trophy was melted down for its gold.

“We thought [the base] was lost in Brazil,” Ausseil said. “We think no FIFA president has seen it since Jules Rimet himself.”

The World Football Museum is due to open in March 2016 in Zurich.