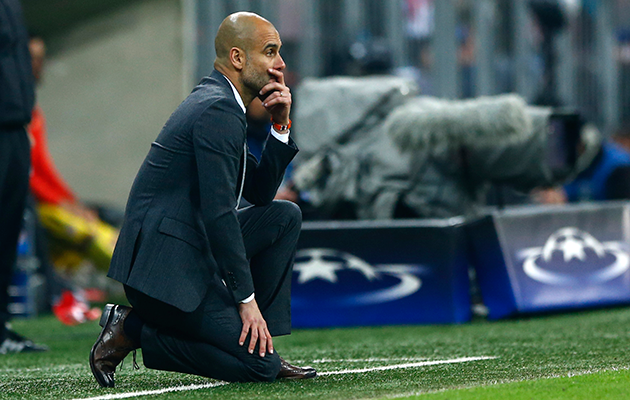 Pep Guardiola has defended his record at Bayern Munich saying that he should not be judged a failure just because he did not reach the Champions League final with the club.

For the third season in succession, Guardiola lost at the semi-final stage of Europe’s elite competition to Spanish opposition – on this occasion, to Diego Simeone’s Atlético Madrid. Bayern won 2-1 on the night but went out on the away goals rule.

Although Bayern are on course to win a third successive title under Guardiola, the Spaniard was appointed, ostensibly, to bring success in Europe. Not least as, under his predecessor, Jupp Heynckes, Bayern won a fifth European Cup 2012-13.

“It was my aim to achieve this,” Guardiola, who leaves in the summer to join Manchester City, said. “At Barcelona, everyone asked me this question and it has been the same thing here. We have tried our best but it hasn’t worked out. In terms of my period here, it’s up to you what you want to think.

“I think I have helped the players here. I am very satisfied with the performances. Maybe it wasn’t enough but in the end, I am satisfied with everything that has happened here. Everything is good. I have done my best. The players know that.

“I have given my life for this club, from the first minute to the last and we played well tonight. Maybe we played not so well at other times. I am very proud. It was a real honour to train these players. I have really enjoyed it here and I am sure the future at Bayern Munich is perfect with these players.”

Guardiola said he should not be judged by the number of titles he won.

“Titles are just numbers, statistics,” he said. “I wanted to reach the Champions League final here and I didn’t achieve it but it doesn’t change my opinion about the way I have performed. Yes, we are sad now and we want to go to Ingolstadt [on Saturday] to secure the Bundesliga title.

“Is this the biggest disappointment of my career? No. You are disappointed when you don’t play well. It’s a Champions League semi-final. It was the same when I was at Barcelona and we lost to Chelsea [in 2012]. We tried our best to score that night but we didn’t get through.

“Atlético were very defensive. We played to win and we did that. We didn’t score a goal in Madrid and that was the difference. We could have scored three or four tonight. My idea is to attack and go forward.

“The most important thing is this club has a great future, with great players and a great mentality. I just wish the best for the future at this club and I hope Carlo Ancelotti [the incoming manager] can keep the same level going.”