1. Delivering at the death
Just three days after crushing Arsenal 5-1 in the Champions League, Bayern Munich found the going far tougher on the domestic front, needing a 96th minute Robert Lewandowski equaliser to salvage a point in a 1-1 draw at Hertha Berlin.

As inevitable as night following day, the hosts suddenly turned into post-match conspiracy theorists. Rehashing the old chestnut that the Bavarians receive preferential treatment from match officials, Hertha coach, Pal Dardai, sourly described the amount of injury-time allotted as a “Bayern Bonus”, while centre-back defender, Sebastian Langkamp, bitterly spoke about “the unwritten rule that you can’t win against them.”

Within seconds of their first victory over Bayern in twelve encounters, Hertha’s frustration was understandable. But one also must applaud the spirit in the Bayern ranks. This season, the champions have picked up nine Bundesliga points thanks to goals scored after the 80th minute and in three of their five games since the winter break, have won in time added on.

With tempers boiling over following Lewandowski’s late show, two individuals could be in a scalding disciplinary water. Hertha keeper, Rune Jarstein, for deliberately smashing the ball at opposition midfielder, Xabi Alonso and Bayern coach, Carlo Ancelotti, who was seen ‘giving the finger” to home fans. Usually the most placid of men, Ancelotti claims he was spat at.

2. Leipzig pass their stress test
Hold the presses: the title race is not yet over. Thanks to a 2-1 win at Gladbach on Sunday, second-placed RB now trail pacesetters Bayern by only five points and with the Roten Bullen due to play four of the bottom six in their next five league games, the Saxons could well narrow the gap at the top of the table.

Although not at their fluent, high-tempo best at Borussia Park, RB can, nevertheless, take great heart from their victory out west. After back-to-back defeats to Dortmund and Hamburg, the rot had to be stopped forthwith and no matter that they had to win ugly, gutsily circling the wagons at the back and clinically converting what few chances they created (ace marksmen, Emil Forsberg and Timo Werner, doing the honours with a goal in each half).

Up until Sunday, the Leipziger, had not scored on the travels for 311 long minutes. Bye-bye mini-crisis.

Not that Gladbach coach, Dieter Hecking, was overly impressed by the visitors: “Leipzig were not better than us. Just more effective.”

3. Forget the yen
The free-spending burghers of the Chinese Super League are said to be targeting prolific Köln striker, Anthony Modeste, who scored his 17th goal of the season at the weekend in a 1-1 draw at home to Schalke.

An unnamed Chinese club, keen to secure an immediate deal for the muscular Frenchman, apparently were prepared to pay 40 million euros, a massive bid which the Kölner straight away turned down.

“Our position is clear,” declared director of sport, Jörg Schmadtke. “Even though it’s a lot of money, we have no intention of jeopardising our sporting goals because of a transfer. In this case, there’s no offer which could sway us.”

Allowing Modeste to quit the Mungersdorfer at this point of the campaign would make no sense at all. Currently seventh in the Bundesliga table, Koln are only three points off a Champions League qualifying spot and as long as their number 27 is banging in the goals, that dream stays alive. 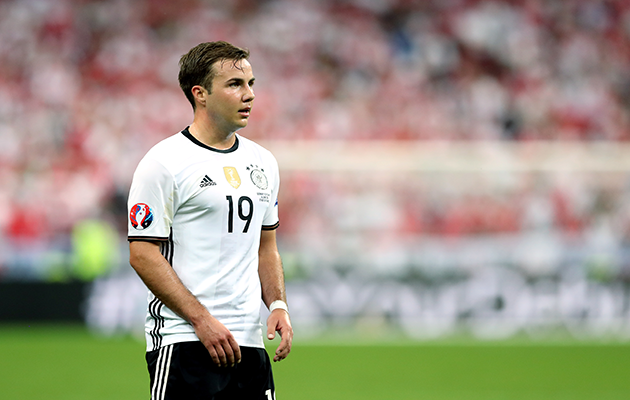 Despite his poor form since returning to Dortmund, Mario Götze retains the faith of national coach Joachim Low.

Never one to ask too many questions of his squad inner circle, Bundestrainer, Joachim Löw, is insistent that troubled attacking midfielder/false nine, Mario Götze remains an integral part of his plans.

Since returning to Dortmund last summer following three mediocre years with Bayern, ‘SuperMario’ has proved anything but a success, starting infrequently, only managing two competitive goals and yet to take to the field in 2017 due to various injuries.

“Even when he’s not in the best shape for his club, I know that he can perform well with us, ” argued ‘Jogi’ in an interview with Kicker magazine. “Mario is someone who can make a difference. He scores goals against top sides, Argentina, Brazil. If a player is producing in the Bundesliga, it doesn’t mean that he will give us what we need in a World Cup knock-out tie. To help us win titles.”

It’s up to you, Mario. Now return the favour.

5. Fifty thousand up
Leverkusen’s first entry on the score-sheet in their 3-1 win at Augsburg on Friday certainly was one for the annals, with Nationalmannschaft winger, Karim Bellarabi, netting the 50,000th goal in the history of the Bundesliga.

At last some good news for the unfortunate German-Moroccan who prior to the weekend, had not scored all season and has been performing below par for far too long, a dip in form which cost him a spot in Germany’s Euro 2016 squad.

Bellarabi is no stranger to footballing feats. He also jointly holds the record – along with current teammate Kevin Volland – for the quickest ever Bundesliga goal, on target after just nine seconds in a match against Dortmund on the opening day of 2014-15.

Barcelona back Luis Enrique for the time being