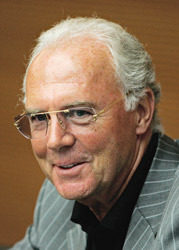 Man City continue their UEFA Cup quest today when they travel to Hamburg for their 1st-leg Qtr-final – 19:45

Furious Bayern Munich president Franz Beckenbauer has described the first-half performance against Barcelona as the worst in the club’s history.

Barcelona humiliated Bayern, scoring all of their goals in a 4-0 win before half-time of their Champions League quarter-final first leg.

“What I saw in the first half is, without doubt, the worst football in Bayern’s history,” said Beckenbauer.

“It was a demonstration, almost a humiliation. They gave us a lesson.”

The defeat piles further pressure on Bayern manager Jurgen Klinsmann, who saw his side thrashed 5-1 by Wolfsburg in the Bundesliga at the weekend.

“What I want to say is that we must now concentrate on our next match against Frankfurt on Saturday,” Rummenigge said.

“We have no more hope in the Champions League, that is obvious. Now we have to concentrate on the Bundesliga and at least make sure of our place in this competition (for next season).”

Man City continue their UEFA Cup quest today when they travel to Hamburg for their 1st-leg Qtr-final – 19:45