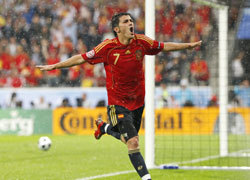 Liverpool manager Rafa Benitez has admitted he is interested in signing Valencia striker David Villa as a replacement for Portsmouth-bound Peter Crouch.

Crouch is expected to complete his summer transfer to Pompey fter agreeing personal terms with the South Coast club.

Spain’s Villa has been attracting interest from several leading European clubs after he finished top scorer at Euro 2008.

“But we will try to bring in another option. Villa is a player we know all about and he is on our list. But maybe it will be difficult.”

On Crouch’s departure, Benitez said he had nothing but respect for the England striker.

“He is a good professional and a nice person, and we would have wanted him to stay. We offered him a new contract,” said Benitez.

“But sometimes you have to understand the player. He wanted to play a lot more, and with Fernando Torres now first choice, that was always going to be difficult.

“I can understand Peter’s situation. But he did very well for this club and we always supported him when people doubted the decision to bring him to Anfield.”