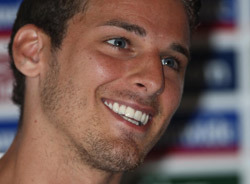 Tottenham midfielder David Bentley has been charged with drink driving and has issued an apology for his behaviour.

It was reported that the midfielder crashed his Porsche into a lamp post at 3am and was found standing near the wreckage of his black 911 on a dark country lane in Northaw, Herts, before being arrested.

A police spokeswoman said: ”He has been charged with a drink driving offence and has been released on bail to return to St Albans Magistrates’ Court on August 28.

”The charge is in connection with an incident which happened last night. A member of the public called just after 3am to report a single vehicle road traffic collision in Judges Hill, Northaw.

”A man was arrested at the scene and taken to Hatfield Police Station. This morning David Bentley, 24, has been charged with an offence to appear in a few weeks.”

The former England winger released a statement on Spurs’ website apologising for his behaviour. It read: ”I should like to apologise to my Club and the supporters for my actions which led to my car accident last night and my subsequent charge.

”It was wholly unacceptable and I fully appreciate that as a professional footballer I have a duty to behave in a reputable and responsible manner. I am thankful that nobody was injured in the accident. This has been a wake-up call for me both personally and professionally.”