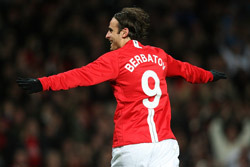 Champions League Betting A great night for the English sides with Man Utd seeing off Celtic 3-0, while Arsenal beat Fenerbahce 5-2 on the road. See all the betting here.

Sir Alex Ferguson has lavished praise on striker Dimitar Berbatov, claiming the Bulgarian is on the verge of living up to his £30.75million price tag.

Berbatov scored his second successive Champions League brace in United’s 3-0 win over Celtic on Tuesday, and Ferguson singled out Berbatov for special praise.

”Dimitar produced some fantastic pieces of football,” said Ferguson. ”The players are starting to understand what type of player he is a bit more now.

”I always feel he produces passes that mean something. Three or four of them were absolutely superb and overall he has five goals for us already, so he is making a terrific contribution.”

In-form striker Wayne Rooney also got his name on the scoresheet scoring his ninth goal in seven games for club and country, and Ferguson believes Rooney will soon emulate Cristiano Ronaldo as a contended for the coveted Balon D’Or.

”Wayne is capable of getting to that level,” said Ferguson. ”Both him and Cristiano were teenagers when they came to us but their progress has been fantastic.

”The only reason we are not talking about Wayne at the same level as Cristiano is the fact one of them scored 42 goals last season. That is why Cristiano should win the Balon D’Or. If Wayne can get to that sort of level, he is there.”

Champions League Betting A great night for the English sides with Man Utd seeing off Celtic 3-0, while Arsenal beat Fenerbahce 5-2 on the road. See all the betting here.