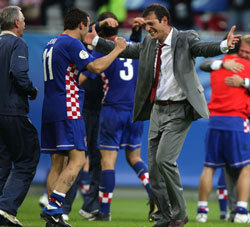 After their humiliating defeat to Holland – Italy will need to bounce back this Friday against Romania if they want to keep their Euro 2008 dreams alive. Click here for the latest match odds!

Croatia coach Slaven Bilic hailed his side after their surprise 2-1 win over Germany earned a place in the Euro 2008 quarter-finals.

“It was a great game. But I want to congratulate my players – not only for the fight they showed but for playing an excellent match,” said Bilic.

“There is no other way to beat the Germans than to play well.

“We controlled the game but Germany are still a great team and still one of the favourites for the title.

“This is certainly one of the most significant wins in Croatia’s history, bigger than the 3-2 qualifying win over England at Wembley that came after we had already booked our berth in the finals.

Bilic singled out Luka Modric whose assured display at the heart of the midfield, earned him the man-of-the-match award.

“Luca is already a star even without this tournament,” said Bilic. “I keep saying to him every day that he’s the best player in Europe.

“But he’s not the only great player on our team, we have world class players and they prove it day in, day out, every day in training and in every match in each part of the pitch.”

Modric’s performance helped Croatia produce a display which was a huge improvement on their performance against Austria in their opening game.

“We are overjoyed by this win, we started off playing tough, the way we wanted to,” said Modric.

“We wanted to exert pressure on our opponents so as not to allow them to develop their own game.

“We also wanted to show that the criticism after the first match was uncalled for.”

After their humiliating defeat to Holland – Italy will need to bounce back this Friday against Romania if they want to keep their Euro 2008 dreams alive. Click here for the latest match odds!