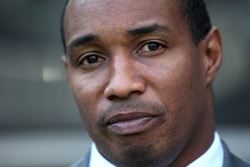 Tottenham can seal their place in the next round of the UEFA Cup with a result over Spartak Moscow this Thursday at White Hart Lane.

Blackburn Rovers have confirmed that they have sacked manager Paul Ince.

Ince joined Blackburn in June, but their last league win was at Newcastle on 27 September and the club are currently languishing in the relegation zone five points adrift of safety.

“We are currently in danger of becoming detached from the pack.”

The decision to sack Ince was taken after a Blackburn board meeting, and Williams made it clear that the importance of maintaining their premier league status was behind the move.

Williams was publicly critical of Blackburn’s display in what proved to be Ince’s final game, the 3-0 defeat at Wigan on Saturday.

He added: “The survival of the club in the Premier League is paramount and our focus is on finding a replacement who will be able to maintain our top division status.

“Paul will bounce back, he is a fighter and we wish him well.”

A statement released on the Blackburn website said: “The board, having selected Paul Ince back in June, were desperate for him to succeed and wanted to give him as much time as possible in the unforgiving environment of the Premier League, where time is such a precious commodity.”

Early reports suggest that former boss Graeme Souness is one of the favourites to replace Ince, with the likes of Sam Allardyce, Alan Curbishley and Roberto Mancini also linked.

Tottenham can seal their place in the next round of the UEFA Cup with a result over Spartak Moscow this Thursday at White Hart Lane.