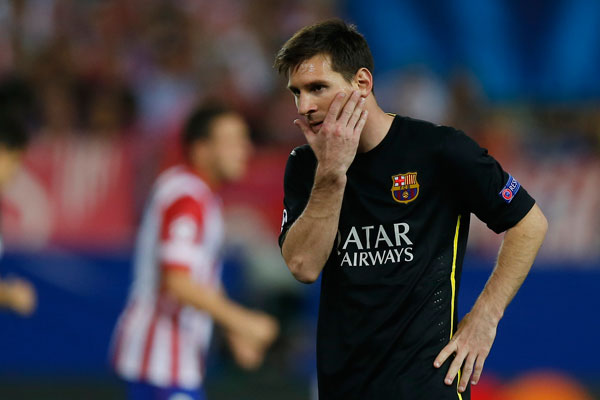 Barcelona legend Johan Cruyff has accused the club’s hierarchy of been ruining the club for the last four years.

The sense that we are approaching the end of Barcelona’s golden era continued this week after they were knocked out of the Champions League by Atletico Madrid and Cruyff charts the club’s decline to intolerable levels of interference from directors and presidents.

Cruyff said: “I have been saying for a  long time that for the last four years it has not been the coach that has been making the decisions at Barça.

“That is why what is happening now is to be expected. It started with directors telling Pep Guardiola to sell a player he did not want to sell. From then on it was clear who was calling the shots, not the coach.”

Barcelona sold Dmytro Chygrynsky back to Ukranian side Shakhtar Donetsk in 2010 just one year after Guardiola had requested his signing.

The decision came during the first year of Sandro Rosell’s presidency and was taken against the coach’s will.

Barcelona then failed to land Thiago Silva who opted instead to join PSG. They are still desperately in need of central defensive reinforcements, often having to deploy converted midfielders such as Javier Mascherano and Alex Song at the back as cover for skipper Carles Puyol, who has been absent for much of the last two season with a variety of injuries. The FIFA imposed transfer can only serve to exacerbate these issues.

Last summer the club added Brazil forward Neymar to their rich array of attacking talents, when many felt that acquiring defenders should have been the priority.

Cruyff added: “Tata Martino does what he can but it’s not the coach who makes the decisions. The directors have been influencing things for some time now and it gets worse and worse.

“I don’t blame Neymar in all of this. He is a victim of money, of his manager, and of the club.’

Cruyff also defended Leo Messi. He said: “There is no common sense when it comes to Messi. Three weeks ago he was the best and then after this week’s game he is the worst.

The mood within the Barcelona squad was certainly sombre after Wednesday’s defeat Atletico Madrid.

Here the players can be seen sitting in silence as they waited to be transferred to their return flight.