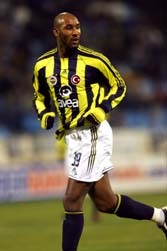 Nicolas Anelka has joined Bolton Wanderers after the Premier League club agreed to pay Fenerbahce a club record fee of £8 million for the French striker.

The 27-year-old, who has had spells in England with Arsenal, Liverpool and Manchester City, completed a medical on Thursday and the club confirmed the deal on Friday.

“Nicolas is a player with an amazing track record in the Premiership,” Bolton manager Sam Allardyce told the club’s Web site.

“Patience is a virtue and I am pleased to say that all the waiting and hard work we’ve done behind the scenes has paid off.

“He was born to score goals. His talent and experience will be a valuable asset for us.

“It’s an unprecedented amount of money for Bolton Wanderers to spend and fully underlines the club’s ambition.”

After two and a half years, Arsenal sold him for £22.3 million to Real Madrid, where he stayed for one season, before returning to PSG.

However, the striker was soon on the move again, and after spells at Liverpool and Manchester City, he then joined Fenerbahce in January 2005 before his latest move back to England.