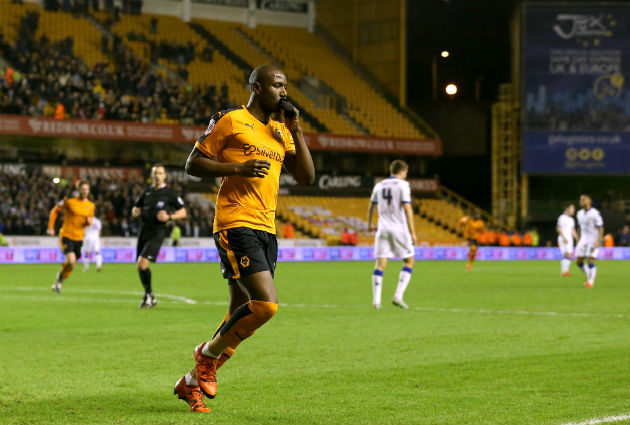 The spending power of the Premier League was in full force again with Bournemouth splashing around £9 million on Wolves hotshot striker Benik Afobe.

Afobe passed a medical and the deal was finalised on Sunday after the clubs agreed a fee on Friday with the frontman signing a four-and-a-half-year deal.

Afobe, 22, possesses all the necessary attributes required to play in the Premier League. He is strong and powerful and will look to boost Eddie Howe’s side prospects of Premier League survival in the second part of the season.

CONFIRMED: In case you missed it, #afcb have confirmed the signing of striker @Afobe_: https://t.co/9qdMdNOylY pic.twitter.com/XO5hnnMFd7

Despite failing to break through into the Arsenal first team, Afobe has been a hit for MK Dons and Wolves. During his time at MK Dons, he struck 19 goals before joining Wolves in January 2015 hitting 23 goals in the Championship in total.

“I’m delighted. It’s been a long time coming and I am just very thankful the manager has given me this chance and opportunity to be at this Premier League club and I can’t wait to get going,” Afobe told the club’s official website.

“I have done a lot for someone that’s only 22. I’ve had injuries, I’ve been out on loan to six different clubs, so I’ve played for a lot of different clubs in my young career so far.

“I’ve learned a lot definitely – good things and bad things – and I’m just going to take it all on board and keep improving while I’m here at Bournemouth. The manager here is a young manager so he obviously understands how young players think. He just wants to get the best out of me and that’s what I want to do.”

Manager Eddie Howe, speaking to the Bournemouth Echo said that the acquisition of Afobe is emblematic of attracting more quality signings in the future:

“We feel this is a very good deal for the long-term future of the club.

“We are trying to look to the future and have signed a player who we believe will get better with us and, hopefully, stay here for many years. You could go through our squad and pick 80 per cent of players who hadn’t done it until they had been with us.

“You need to give players an opportunity and a chance to prove they can or can’t do it. “We could easily go the other route and sign players who have done it but are potentially past their best. But I don’t think that is the right way for this club to go.”