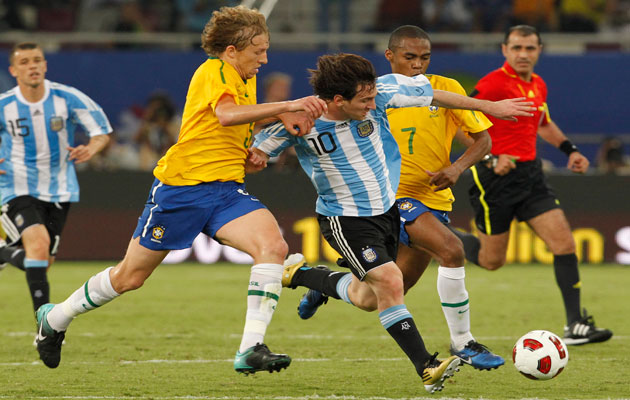 The Swiss investigation into FIFA’s award of the 2018 and 2022 World Cups to Russia and Qatar is also looking at the money paid for Argentina friendly international Brazil that was staged in Qatar three weeks before the vote.

The Swiss attorney general’s office said it seized documents from the agency Kentaro, which organised the match, and that Kentaro’s chief executive, Philipp Grothe, had been cooperating with investigators trying to trace where the fee payable to the Argentine Football Association (AFA) ended up.

The Swiss investigation into the match is focused on the $2m match fee payable to the AFA, and whether it did indeed reach the coffers of the organisation. It is two unnamed companies in Buenos Aires that are understood to be under suspicion.

The Zurich-based financial services firm Swiss Mideast, which organised the financing of the friendly on behalf of the Qatari construction firm GSSG, said it had made no payments outside the $8.6m it agreed with Kentaro as the total cost of the friendly.

Martin Signer, a lawyer at Swiss Mideast, confirmed to the Guardian that he was involved in organising the match on behalf of GSSGr

Signer said Swiss Mideast agreed the contracts and paid the money, while Kentaro organised and delivered the match.

“We did help to organise this match together with GSSG,” Signer said. “We paid a market rate to Kentaro for the game. It was successful from our point of view.”

Despite the concerns raised about payments from the match, and speculation that they involved additional money from Qatar, Signer said FIFA’s World Cup bid investigator Michael Garcia didn’t speak to Swiss Mideast at all about the staging of the match.

“I do not know anything about any concerns stated over contractual arrangements or payments,” Signer said. “No investigators have been to see us, so far.”

Concerns about payments relating to the Argentina v Brazil friendly in Doha were included in the summary of Garcia’s report published in November by Hans Joachim-Eckert, the German judge who chairs FIFA’s ethics committee’s.

Eckert said that according to Garcia’s report: “The financing of the event and the contractual structures in this regard raised, in part, concerns … in particular in relation to certain arrangements concerning payments intended for the Argentina Football Association.”

Eckert stated that: “The relevant arrangements were not connected to the Qatar 2022 bid.”

Garcia resigned from FIFA in December, after contesting Eckert’s summary. Eckert has dismissed that criticism and insisted his document was a fair and accurate reflection of Garcia report.