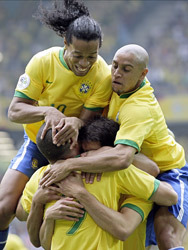 Brazil are through to the quarter-finals of the World Cup, after a comfortable 3-0 win over Ghana in Dortmund.

The result was just about deserved although for long periods of the match, Ghana controlled possession and but for some terrible finishing from their erratic forwards, could possibly have got something out of the game.

However, overall, the holders simply had too much nous for the African side, who didn’t help themselves by employing a risky offside trap that Brazil exploited for two of their three goals.

Ultimately, the match is likely to be remembered for Ronaldo’s achievement in breaking Gerd Muller’s World Cup scoring record, when he opened the scoring in the fifth minute of the game. It was the Brazilian’s 15th goal at the finals and a timely reminder to all those who had written him off earlier in the competition.

For the biggest match in their history Ghana coach Ratomir Dujkovic recalled Eric Addo for the suspended Michael Essien. Sulley Muntari returned from suspension while Asamoah Gyan returned to partner Matthew Amoah in attack. Emmanuel Pappoe returned at the expense of Habib Mohamed in defence.

Brazil reverted to their first-choice line-up, with Jose Ze Roberto, Adriano, Emerson, Roberto Carlos and Cafu returning. Cafu was playing his 19th World Cup finals match, a new Brazilian record, while Ronaldo was looking to score the goal that would give him the World Cup scoring record.

The Brazilian wasted little time overtaking Muller’s tally, when he broke Ghana’s sloppy offside trap before performing a shimmy that took him past Kingson, to score his 15th goal at the finals. More importantly, the goal gave Brazil a one-goal lead within five minutes of the kick-off.

Ghana’s tactic of defening high up the pitch was looking suicidal in the opening quarter of the game. Brazil repeated their earlier move on 13 minutes, this time it was Adriano bursting through but his finishing could not match that of his striker partner and although the Inter striker skipped past the keeper, he fell to the ground appealing for a penalty. The referee was having none of it and showed the Brazilian a yellow card for diving.

Ghana took their time to get going but they gradually began to gain a foothold in the game and after a neat passing move, Muntari received the ball on the edge of the area, but he dragged his shot wide. As the half progressed the balance of play had shifted and it was Brazil who had to defend as Ghana dominated possession.

Amoah came close when Brazil failed to clear an Appiah cross, but Amoah’s shot was straight at Dida. At the other end Kingson flapped at a couple of Ronaldinho crosses but on each occasion the ball dropped to safety.
Muntari was unlucky not to equalise five minutes before half-time when Mensah rose unmarked at a corner but his downward header was straight at Dida and although he knew little about it, the ball cannoned off his foot and away to safety.

However, on the stroke of half-time Brazil made Ghana pay for their profligacy when they broke in numbers and Cafu crossed for Adrinao to bundle the ball over with his thigh. It was a swift, incisive counter-attack, but a more alert linesman would have spotted that Adriano was offside when the final pass was made.

After the break, Ghana again took the game to Brazil, but for all their intricate approach play, their finishing continued to let them down. Meanwhile, Brazil were content to soak up the pressure and hit their opponents on the counter attack. On one such break Ronaldinho picked out Robert Carlos, but the full-back poked his shot straight at Kingson.

Ghana’s best chance came midway through the half when Amoah was put through on goal by a clever pass from Appiah, but his curling right foot shot was well saved by Dida.

Ghana’s hopes were hit further with ten minutes remaining when striker Gyan was given a second yellow card. However, given his finishing throughout the tournament

Shortly after Gyan’s departure, Ze Roberto added a third for Brazil, when he sprung the offside trap before chipping over Kingson and rolling the ball into the empty net.

In construction the goal was almost identical to Ronaldo’s effort and Adriano’s earlier miss, and it confirmed that for all their flair going forward, Ghana had ultimately been undone by their failings at the back.

There could have been more goals from Brazil in the closing minutes but Kingson repeatedly denied the holders to ensure the scoreline retained an air of respectability that Ghana’s overall play deserved.