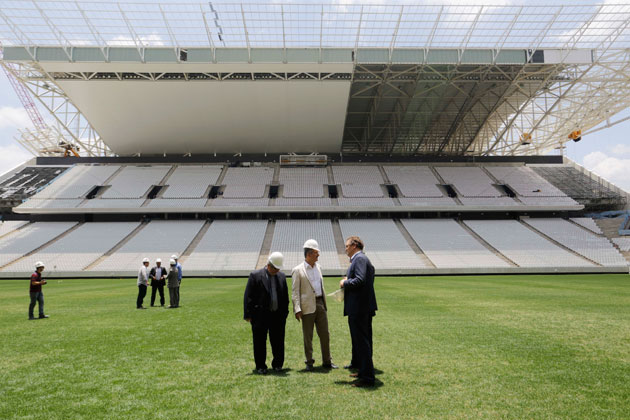 FIFA Secretary General Jerome Valcke was in upbeat mood after his latest visit to the new Sao Paulo World Cup stadium in Brazil.

The Itaquerao stadium, the first on his latest inspection tour, where a crane collapsed and killed two workers last year, will host the opening game of the World Cup.

“In a way I would say the pressure is a little bit bigger here,” Valcke said at a news conference. “It’s the first game. It has to be a success. The world will be watching.”

He said he was confident there will be enough time for test events after its completion in April. The World Cup kicks off on June 12 with Brazil playing Croatia.

“We will do all that we can to make sure this opening game is a success,” Valcke said.

The Itaquerao was among six that missed the December deadline established by FIFA for all World Cup stadiums to be built and is not expected to be ready until mid-April.

Valcke was travelling to the southern city of Curitiba today to inspect the Arena da Baixada before heading to Natal and Cuiaba which was not originally scheduled for the latest tour but was added when Manaus was ruled out as a result of workers’ protests.