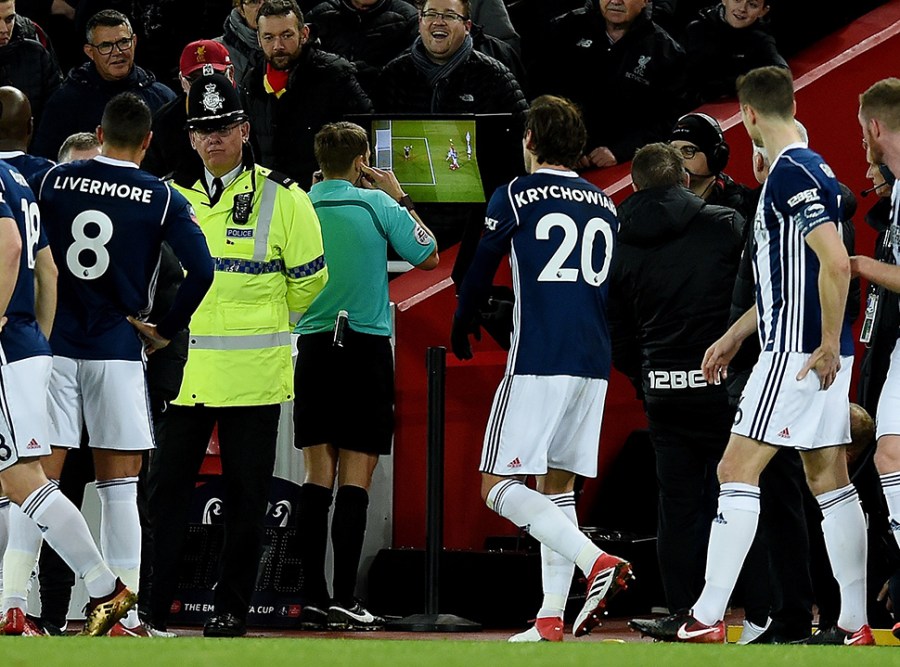 Pardew highlighted the problems with VAR, the Spy in the sky

Perhaps inevitably, the FA Cup introduction of the VAR observation system has elicited instant controversy. Not least in the dramatic tie at Anfield in which so surprisingly West Bromwich Albion got the better of Liverpool. In parenthesis, it was surprising to read no mention of the fact that Albion won despite keeping their star striker, the powerful Salomon Rondon from Venezuela, on the bench throughout.

Since his team still managed to score three goals you could hardly blame manager Alan Pardew for that. He had some interesting things to say after the same about the newly introduced system.

“It’s hard to know where to start. I don’t think this is what we want to see going forward whether you a Liverpool or West Brom fan. Firstly there is no communication from the referee to us. Like in the NFL (US football) when there is a call and they say they are going to look at that. But the bigger decision was the four minutes for the Salah decision (a missed penalty for Liverpool). You are going from high tempo workrate to nothing. We had a hamstring just after that. As a coach we have to change, we are going to have to get our players to mentally warm up in that situation and keep themselves ticking over. You couldn see that is a lack of professionalism against us… As a football person on the sidelines, I wasn’t comfortable with the first half. It was a mysterious situation at times.”

A complex one, certainly. On 19 minutes, WBA’s Craig Dawson scored to head in a corner with what would have been his team’s third goal. It took two minutes’ consultation between the referee Pawson and the “spy in the sky” Andre Mariner to disallow the goal for offside against Gareth Barry, standing in front if the home goalkeeper. Soon afterwards, Pawson seemed to see nothing wrong with an evident tug by WBA’s Livermore on Liverpool’s Salah. It was the spy in the sky who gave the spot-kick after several minutes’ stasis.

But what of Albion’s eventual third Albion’s third, duly awarded again after consultation? An own goal off Matip with Jay Rodriguez standing in an offside position at the far post. Referee and spy in the sky endorsed the goal.

In an ideal world, the new system would surely be welcome. One thinks of another two incidents, both in World Cup finals, where it would surely have seen justice to be done. Geoff Hurst’s goal against West Germany in the 1966 World Cup Final, in off the underside of the crossbar. Eagerly awarded by the linesman, Bakhramov. To this day it is hard to know whether he was right.

By sharp contrast, a perfectly valid goal by England in their subsequent World Cup game against Germany was ludicrously disallowed, Frank Lampard’s fierce drive from outside the box hit the underside of the bar and bounced well over the line. Germany proceeded to wipe the floor with England but goals famously influence the psychology of a game, Would England have collapsed as they did had Lampard’s goal been properly allowed?

Antonio Conte, volubly at odds with the Chelsea hierachy, seems sure to be replaced at the end of the season, probably it seems by Luis Enrique, formerly a Barcelona manager and star winger. Of late, Conte has been doing some strange things. Not least in that Cup game so surprisingly lost to Arsenal, when he inexplicably deployed his very recent acquisition, Ross Barkley, who had been ruled out for many months of the season, given just one run out before the game lost to Arsenal in what was virtually a junior match. Arsenal profited accordingly.

The latest round of the FA Cup showed that there is life in the splendid old dog yet. Giant killing was on the verge of the game between humble Newport County and a stuttering Spurs. Notts County almost accounted for Swansea City, with that splendid veteran Jon Stead getting another of his important goals. Mark Robins, who once saved Alex Ferguson’s back as a Manchester United striker, managed a Coventry City team which defeated MK Dons away. It is over 30 years since Coventry won the Cup. Their winning goal was scored by Maxime Biamou, who last season was a key figure in Sutton United’s remarkable Cup run.

* A new edition of Brian Glanville’s “The Story of the World Cup” has been published by Faber & Faber, priced £15.99