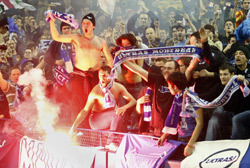 The football focus is switched this weekend to another set of World Cup qualifiers, including Holland v Scotland and Portugal v Sweden.

Montreal’s progress is good news for the Canadian game in general – and Vancouver in particular.

The only problem with a quick climb to success is that a subsequent fall results in more acute pain. And that’s exactly what Montreal Impact discovered after suffering one of the worst sporting defeats in Canadian professional sports history.

Having beaten Santos Laguna of Mexico 2-0 in a glorious CONCACAF Champions League quarter-final first leg – played before a club record 55,583 fans at Montreal’s Olympic Stadium – the Impact were 2-1 ahead at half-time in the return. Leading 4-1 on aggregate with just 45 more minutes to go, another game before a gigantic crowd in the semis was already on everyone’s mind.

But that’s when the sky fell in on Canadian heads.

Invisible up until then, Mexico international Matias Vuoso scored twice within 30 minutes to put the Guerreros within striking distance. With the final whistle beckoning, victory was snatched away in the four minutes of added time as Carlos Darwin Quintero, who came off the bench late in the first half, took advantage of an inept and lifeless defence to score two carbon-copy short goals from close range.

“I never experienced something this bizarre,” claimed Impact defender Cedric Joqueviel. “We should have approached it more intelligently. We had no legs left.”

Head coach John Limniatis was left equally shell-shocked, saying: “We don’t know exactly what happened, only that we played the worst 45 minutes in this club’s history. Maybe we thought it would be impossible for them to score that many goals.

“We did not relax on the field, but we did not realize the danger we faced.”

Montreal, who play in the US first division, had already beaten the odds more than once to make it to the last eight of the tournament. Having surprised MLS side Toronto FC and Vancouver Whitecaps in last year’s Canadian Championship club tournament, they qualified for the Champions League and then beat Nicaraguan league winners Real Esteli to reach for the group stage.

Surprisingly undefeated after their first four games, Montreal clinched their quarter-final spot with a 1-1 draw at home to Olimpia of Honduras.

“We have proved to many that our club is part of the North American elite,” says the club’s technical director, Nick De Santis.

The adventure also proved to be the coming of age for a club that has grown in the shadow of its omnipresent ice hockey cousin in the city. Celebrating their centennial this year, the Montreal Canadiens are ingrained in the French Canadian identity as much as maple syrup.

However, the monster crowd the Impact drew to the Olympic Stadium in February – a period of the year usually reserved for the gladiators on skates – proved once again that Montreal is also a major hub for the beautiful game. After the first-leg victory over the Mexicans, people flooded the airwaves with excitement on local sports talk shows, pledging new interest in the Montreal side and promising to show up at their Saputo Stadium this season.

Club administrators must now hope that the disappointment of the return leg a week later will not have cooled anybody’s new-found passion.

Montreal’s performances in the CONCACAF Champions League – plus the size of crowds they, and Toronto FC, have been posting – have made a case that the North American top tier might need the Impact more than the other way around.

Vancouver Whitecaps, who won the USL’s First Division Cup for a second time in three years last fall, have been confirmed as the MLS’ 17th franchise, beating Portland, St Louis and Ottawa to clinch a spot for the 2011 season.

Despite the business success of Toronto FC since they joined the league two years ago, other MLS club owners had been sceptical of the benefits of adding other Canadian markets to the US-based league. But in the light of Montreal’s success on and off the field, the accession of Vancouver – whose bid was led by Whitecaps owner Greg Kerfoot, Yahoo’s Jeff Mallet and Canadian basketball star Steve Nash of the Phoenix Suns – makes more sense than ever.

Meanwhile, with this year’s competition boasting a three-year-old MLS club, a soon-to-be MLS newcomer and the current CONCACAF quarter-finalists, the 2009 Canadian Championship (which runs from May 6 to June 17) promises to be a fiery affair…and yet another step up for the game in the Great White North.

The football focus is switched this weekend to another set of World Cup qualifiers, including Holland v Scotland and Portugal v Sweden.