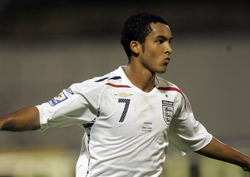 “We played with confidence and no fear from the first minute,” said Capello.

“The players played like they do in training – technically well and with courage. This is the start.”

Capello highlighted the performance of Arsenal winger Theo Walcott who scored a hat-trick on only his second start for England.

Capello said: “I decided to put Theo into the first XI because I saw the game against Andorra at the weekend and also how he was in training – and at this moment he is fantastic psychologically and physically.

“It is very dangerous for defenders against Walcott. At this moment, he is difficult to contain.

“Of course, he is a young player and I said after the Andorra game that he will play fantastic games – but also that he will not play the same level in all of the games.

“When he plays like against Croatia, it is fantastic, but when he plays not so good, we have to support him. This is very important.”

“Becks told me to be a bit more greedy in the box, then afterwards he said I was probably too greedy!” Walcott said.

“He has been absolutely brilliant to me and he just gave me so much confidence. He’s given me praise and it’s unbelievable coming from David.

“I watched him when I was younger. To train with him, to be around him, to talk to him just spurs me on and gives me a big lift.”

“He scored two goals from not so easy positions, he just hit the corner,” said Bilic. “And it is hard to mark him. That is why he is an England international and why he is at Arsenal.”