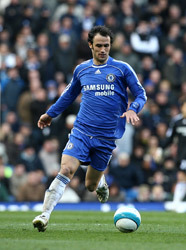 Chelsea, who are two points behind Man Utd, will know that a win against the champions this Saturday will throw the title race wide open. Click here for the latest match odds!

Chelsea’s Ricardo Carvalho is convinced Manchester United are vulnerable in the race for the Premier League title.

The Blues host United at Stamford Bridge on Saturday, aware that anything but a win would effectively end their title hopes.

Chelsea are three points behind the league leaders with three games remaining, but the Portuguese defender believes the title raceis far from over.

“If Chelsea win on Saturday then anything can happen in the last two league games because all of the pressure will be on Manchester United,” Carvalho told the Daily Mirror.

“The Premier League title is like a bicycle race and we are chasing the leaders. But the nerves will show for United in the last few metres.

“This is the most important week of our season. We got the first good result at Anfield and we have put ourselves in a good position to reach the UEFA Champions League final.

“But now we can put ourselves alongside Manchester United in the league.

“To win against Manchester United would give us so much belief and morale. It’s enormous for us because it means we can tie with them at the top of the table.

“A lot of people have written us off in the title race. But we are ready for the biggest games of our season and we are ready physically and mentally for the challenge.

“For the whole of the season I have insisted that we can win the double and each time, with every game it becomes more feasible.

“The draw at Anfield has only increased our morale and confidence for the game against Manchester United,” he added.

“But we know we have to go for three points. A point will be decisive for United and that will be a great result for them.”

Chelsea, who are two points behind Man Utd, will know that a win against the champions this Saturday will throw the title race wide open. Click here for the latest match odds!