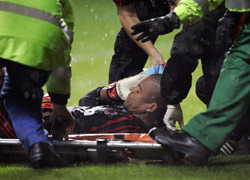 Uefa is set to investigate an incident where a Celtic fan appeared to strike Milan goalkeeper Dida during their Champions League clash at Celtic Park.

Celtic had just scored a late winner with virtually the last kick of the game when the fan ran onto the field and aimed a slap at the Milan keeper.

The impact appeared minimal, and Dida initially chased after the culprit before collapsing theatrically to the ground and was taken off on a stretcher.

Celtic must now wait to see if Uefa decides to impose sanctions on them.

William Gaillard, UEFA director of communications, said: “We need to receive the referee and delegate’s report before the control disciplinary body decides whether to open an investigation.

“We should receive the report before the end of this week. Then one of our prosecutors will look into the document and will decide whether to open the investigation.

“If they open the investigation there needs to be a week or two before the disciplinary body deals with the case.

“There is a whole range of possible punishments.

“But of course they take into account precedence of the same type of incidents. And evaluate the gravity of the facts. This will be up to the disciplinary body.

“We all saw the same images; I don’t want to presume on the opinion of the disciplinary body.”

He told BBC 5Live: “I didn’t see the incident at the time because it was chaos after the goal going in, but I saw the replays on television.

“The contact made by the fan – and I’m making no excuses for the behaviour, the fan behaved disgracefully – but the contact made with the goalkeeper was minimal, absolutely minimal.

“The antics of the goalkeeper have to be taken into account as well.”

Celtic manager Gordon Strachan refused to comment on the issue, but the club said they would “carry out a full investigation”.

Senior Milan officials, including Umberto Gandini, the general manager, confirmed that they would not be making a complaint and there is therefore little or no prospect of the match result being overturned.

“It had nothing to do with the final result anyway” said the Milan manager, Carlo Ancelotti.

In 2005 Dida was hit by a flare thrown by Inter fans during a Champions League quarter-final at the San Siro, forcing the tie to be abandoned.

Inter were subsequently thrown out of the competition and made to play their next four European games behind closed doors. Uefa also fined the club £132,000.