Sepp Blatter is maintaining his campaign to continue making mischief for FIFA in the run-up to the February 26 election to choose his successor as president of the world football federation.

Not for the first time, Blatter’s chosen vehicle has been an article by Patrick Müller, editor of Schweiz am Sonntag.

The issue at stake is whether FIFA’s extraordinary congress has the authority to elect a new president given that Blatter, though suspended from the game for eight years, has not formally submitted his resignation in writing.

Blatter, last June, created a power vacuum when he told a hastily-convened press conference that he would be ‘laying down my mandate’ only four days after having been re-elected for a fifth term in office.

However he has always made a point of denying that he has or was resigning and has stated an intention, more than once, of attending congress in defiance of the ethics committee sentence for financial misconduct in office.

The SamS article claims that “without Blatter’s co-operation FIFA’s interim leaers are in deep trouble because, according to FIFA statutes, Congress can elect a new president only if the incumbent president has officially resigned or if it has voted him out of office.”

A formal proposal to remove Blatter as president is not on the agenda – and the agenda could be amended only by a three-quarters majority of the congress.

FIFA’s lawyers believe that a letter Blatter sent to all 209 national associations after his volte-face is sufficient to be considered as resignation.

However even German sports rights activist Sylvia Schenk, of Transparency International, has cautioned: “Blatter announced in June only that he wished to resign at an extraordinary congress without mentioning a specific date. That’s too vague.” 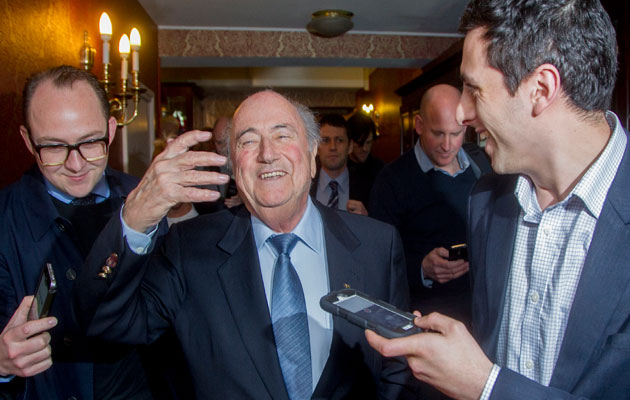 In his pomp…Sepp Blatter speaks to reporters after an IFAB meeting in Belfast.*

Blatter has denied wrongdoing and an initial protest against his eight-year ban will be heard next week by the FIFA appeal committee. It is expected to uphold the verdict of ethics judge Hans-Joachim Eckert in which case Blatter is ready to take his challenge to the Court of Arbitration for Sport.

Preparation of the case for sport’s supreme court would take many months during which Blatter could claim that he remained the legally constituted president of FIFA whoever congress thinks it has elected in his place.

The threat of chaos at congress is possibly Blatter’s ultimate weapon in pursuit of his wish for a diplomatic end to his highly controversial 18 years in office.

He is thought to be holding out for the opportunity to address congress, review what he believes to be his legacy to the development of the world game and make a grand exit on a wave of gratitude.

The candidates chasing the presidency may have other ideas.

South African businessman Tokyo Sexwale, according to the African confederation at the weekend, has withdrawn from the race.