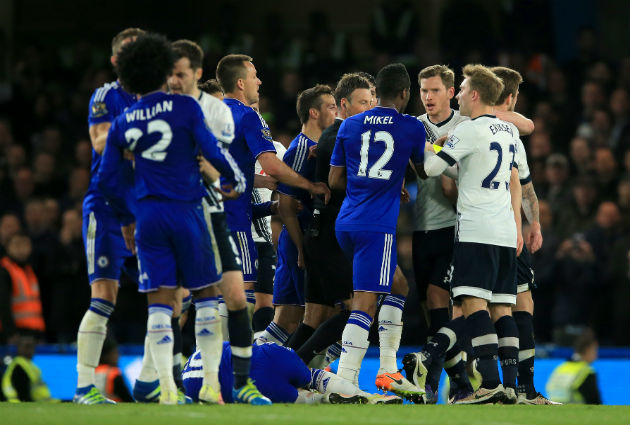 Chelsea and Tottenham Hotspur could find themselves in hot water following an ill-tempered match at Stamford Bridge last night.

Eden Hazard scored late in the game to hand Leicester City their first league title in history. However the pulsating game was marred by bad scenes – both during and at the end of the game.

Tottenham were cautioned nine times during the game, whilst Chelsea were cautioned three times. Under the FA regulations, any team that gets six or more bookings during a game gets charged and gets at least a £25,000 fine.

Both teams could be charged after both teams broke the FA Rule E20 – which cites “mass confrontation”.

There were ugly scenes at the end of the game with Chelsea interim manager Guus Hiddink appearing to be pushed down to the ground.

Chelsea’s interim boss said: “I took one of my players Fabregas down the tunnel because there were words in Spanish and there were threatening words [from the players] and this is a normal reaction.

“Even at my age, I had no problem falling down! These incidents we mustn’t have but in the end, it was ‘let’s calm down’.”

Spurs striker Harry Kane added: “It’s the Premier League we are fighting for. It’s what we want to win. There’s going to be some challenges, it was a London derby and the crowd were up for it and we needed to win – that’s just football.”

Chelsea centre-half John Terry said: “It was a London derby we hadn’t lost in 26 years. It was always going to boil over. A couple of times, it got out of hand but players are fighting for points and titles. It’s emotions – that’s football.”