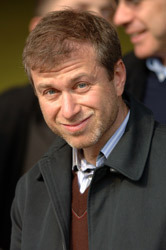 Media speculation suggested that Abramovich’s absence from certain key games this season, including the Champions League semi-final second leg at Liverpool, indicated that the Russian billionaire was growing bored with Chelsea.

However, Buck believes, if anything, Abramovich is still devoted to the club.

“If anything, he has more devotion to the club,” said Buck when asked if Abramovich’s afffection for the club was dwindling.

“He’s very interested in the football, it’s hard to describe. When we lose a difficult match, he’s sulking and there are tears in his eyes.

“He’s a real Chelsea fan. He’s not developing this club to sell it off or anything like that.”