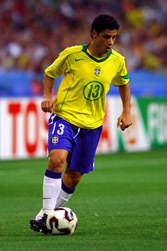 Roma’a Brazilian wing-back Cicinho has had no contact with Chelsea and is content in the Italian capital, according to his agent.

The former Real Madrid defender has been linked with a move to the Stamford Bridge, with Florent Malouda being mooted as a possible makeweight in any deal.

However, his agent Ricardo Sarti reiterated that his client has no desire to leave Roma.

“Here in Brazil I told the press that he is fine and wants to stay in Rome,” he told Corriere dello Sport.

“Of the Chelsea interest, I’ve only read about it in the newspaper. I spoke with Cicinho and he is calm.

“In Brazil they’re even talking about interest from Santos and Internacional but there’s nothing, he just wants to play for Roma.”

Cicinho has made only eight league appearances for Roma this season. He joined the Serie A side on a five-year deal in the summer of 2007 in an €11million move from Real Madrid.