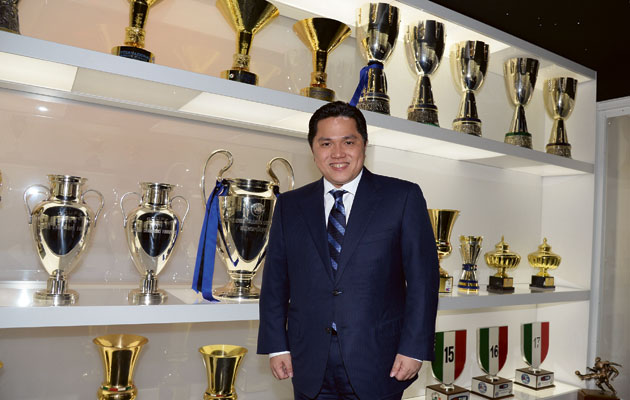 * This article appeared in the October 2014 issue of World Soccer

When Indonesian media tycoon Erick Thohir, the man who acquired a 70 per cent shareholding in Internazionale last year, gave one of his first interviews to the Italian media, he had a surprise in store for the fans. Asked to name his favourite all-time Inter player, he cited Nicola Ventola, a striker for the Nerazzurri between 1998 and 2004.

With such greats as Giuseppe Meazza and Sandro Mazzola in the past, or Ronaldo and Zlatan Ibrahimovic in more recent times, to name just four to choose from, is highly unlikely that your average Inter fan would put Ventola – decent player though he was – at the top of their all-time great list.

A couple of days earlier, Diego Maradona had suggested that Thohir could not tell a soccer ball from an American football, and for a moment Inter supporters began to wonder if there might be some truth in that little dig.

The mystery, however, was soon explained. Ventola is married to the model Kara Luyet, whose mother is Indonesian, making Ventola easily the best-known Inter player in that country.

Speaking recently at the Asia Pacific Media Forum, 44-year-old Thohir admitted candidly that when he bought his majority shareholding last autumn he was a complete unknown to the Inter fans. One year on, the fans know who he is and what he looks like, but questions about his impact on the club remain.

Anyone who imagined that his governance of Inter would follow the big-spending lines of Roman Abramovich at Chelsea or the Qatar Investment Authority at Paris Saint-Germain will have been disappointed. The new-look Inter did not go out and spend megabucks on Colombia’s James Rodriguez, Toni Kroos of Germany, Argentina’s Angel Di Maria or any other star from the World Cup.
Instead, the summer’s transfer campaign came up with the likes of Serb defender Nemanja Vidic (Manchester United), French midfielder Yann M’Vila (Rubin Kazan), Brazilian defender Dodo (Roma), Chilean midfielder Gary Medel (Cardiff City) and Italo-Argentinian striker Pablo Osvaldo (Juventus).
All are more than useful players and, with the exception of Vidic, still in their 20s. More importantly, they all arrived on the cheap.

For Thohir’s Inter it was always going to be about getting the books in order rather than galactic spending. Italian financial daily Il Sole 24 Ore calculates that by June 2013, Inter had ¤423million worth of debts (as opposed to assets worth ¤145m), while the club closed the financial year with a hefty deficit.

And here’s the rub. In the good/bad old days, debts like that at a big Italian club would have been looked after by an industrial-baron owner. In the case of Inter, experts calculate that the former owner, petrol billionaire Massimo Moratti, poured no less than ¤1.2billion into the club during his 18 years’ ownership.

That was the way Italian football went. The huge success of Italian clubs, especially in the 1980s and 1990s, relied on the “industrial baron” model. In other words, when the going got tough, when
a fantastic new player needed to be bought, a “sugar daddy” owner coughed up the money – be he media tycoon Silvio Berlusconi at Milan, Moratti at Inter or the FIAT-owning Agnelli family at Juve.

Not surprisingly, these three clubs have dominated recent Italian history, largely because they have had the financial power. Only twice in the last 24 years – Lazio in 2000 and Roma in 2001 – has the Serie A title been lifted by a club other than Milan, Inter or Juve. However, the two entrepreneurs behind those successes, Sergio Cragnotti at Lazio and Franco Sensi at Roma, basically ran themselves into liquidation in the process.

The initial impression given by Thohir is that he has no intention of following the old industrial-baron model. Ideally, his Inter will stand on its own two feet by reducing its running costs (including player purchases and contracts), by maximising revenue from ticket sales and by developing an international market for brand Inter. Sounds easy, no?

After an initial period when he made a series of PR moves such as visiting players and staff at the club’s Appiano Gentile training complex and dropping in on Milan-based sports daily Gazzetta dello Sport for a morning chat, Thohir has moved into more serious action.

This year has seen a series of important changes both on and off the pitch. Among the players, an entire old guard has finally – much too late, many would say – been disbanded, including the heroes of the 2010 treble campaign such as Esteban Cambiasso (Leicester City), Diego Milito (Racing Avellaneda), Walter Samuel (Basle) and Javier Zanetti, who has retired as a player but now has the role of vice-president.

Off the field, there have been a series of significant changes, especially with regard to the administrative side of the club. Former Manchester United man Michael Bolingbroke has been appointed CEO, former Apple manager Claire Lewis is the new marketing director and Michael Williamson, the former CEO at DC United, the MLS club owned by Thohir, is the new chief financial officer. The “Anglophonic Invasion” has begun. Furthermore, and not unimportantly, Marco Branca has been replaced by Piero Ausilio, the sports director responsible for Inter’s transfer market activity.
If Inter really do intend to regain a place among the 10 best clubs in the world, as Thohir has said often, then it will have to change dimension, moving from an essentially Italy-based business model out into the global market. The point is to move on from the almost total dependency on TV rights that has so dominated Italian football in recent decades.

It no longer makes sense to play in the city-owned San Siro, for which Inter pay a rent. Rather, they need their own stadium complex where, in theory at least, they will make money from both the box office and from ancillary facilities such as shops, restaurants and cafes.

Which is why two of the people that Thohir visited first last November were Milan mayor Giuliano Pisapia and the president of the Lombardy region, Roberto Maroni. The stadium situation is currently far from settled. Basically, Inter would appear to have two options: either build their own new arena or seriously renovate the San Siro with or without the help of city cousins, Milan.

Inevitably, three-way discussions on this issue are likely to prove both complex and long drawn-out.
In the meantime, Thohir made his own thoughts on the matter clear at the Asia Pacific Media Forum, saying: “Clubs cannot rely only on TV rights but they must also make the most out of match-
ticket revenue. Italy should do what they do in the USA, where a club gets a lot of support from its local community. I am talking about offering a club a 100-year lease for a piece of land on which to build a new stadium.” 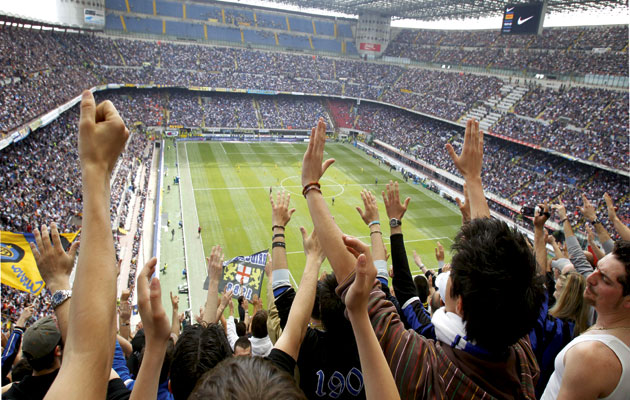 So important is the stadium question that many economic commentators speculated that Thohir and his partners have negotiated a so-called “PUT” clause in their purchase of the club. This would allow them to sell their 70 per cent holding back to Moratti in the event that various economic realities did not add up. One such reality might be any difficulties linked to building a new stadium. A club spokesperson, however, told World Soccer that no such agreement exists.

In the meantime, the Inter season has got off to what can only be called a mixed start. The good news concerns a 1-0 Europa League win over Dnipro in Ukraine and, for the second consecutive season,
a 7-0 thrashing of little Sassuolo in Serie A. The bad news came from draws with Torino and Palermo, suggesting it is by no means guaranteed the club will achieve its seasonal objective of a third-place, Champions League-zone finish.

For the time being, the spine of coach Walter Mazzarri’s team consists of goalkeeper Samir Handanovic, defenders Andrea Ranocchia and Vidic, midfielders Medel, Hernanes and Mateo Kovacic, with an all-Argentinian front line of Mauro Icardi and/or Rodrigo Palacio and Osvaldo.

Despite such talent, Mazzarri’s side has thus far looked more willing than able, although it is still early days. One problem which Mazzarri and the club seem to have finally resolved concerns the talented Colombian midfielder Fredy Guarin. For much of this year, Guarin seemed to be on his way out of Inter. Last January, his proposed move to Juventus – in a deal which would have seen him exchanged for Juve’s Montenegro striker Mirko Vucinic – prompted such a negative fan reaction that Thohir, on the advice of the Moratti family, called off the deal.

Inter fans had a point, since the 28-year-old Guarin would look to have a lot more football in front of him than an injury-prone 30-year-old who has since moved to United Arab Emirates club Al Jazira. For much of this summer too, Guarin appeared to be on the point of moving, with Inter ready to replace him with such as PSG’s Ezequiel Lavezzi.

But no such move materialised – and Mazzarri, Inter and Guarin have had to wipe the slate clean and start all over again. Getting the best out of Guarin, as well as from players such as Icardi and Hernanes, represents one of the big challenges for a coach who might not have been Thohir’s first choice but who now appears to have the Indonesian’s full approval.

Inter’s progress, or lack of it, this season will be closely monitored not only by Thohir and Inter fans. In a way similar to the now US-controlled Roma, Inter could represent the way forward for Italian football which, on and off the field, is so clearly in need of new ideas, new energies and new directions.