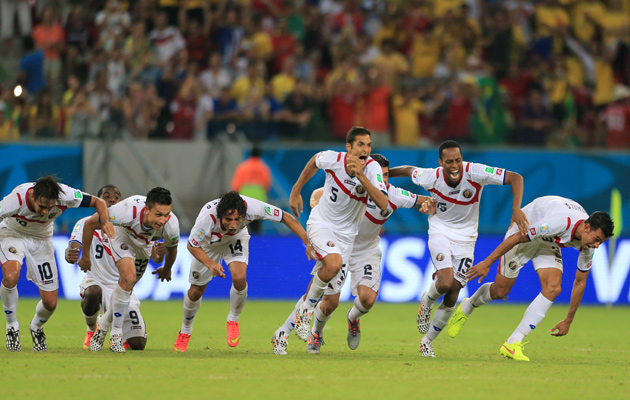 Match overview: Costa Rica reached the World Cup quarter-finals after a penalty shoot-out victory over Greece. When Greece snatched a dramatic equaliser in injury time of the regular 90 minutes through Sokratis Papastathopoulos, the odds had seemed stacked against the Ticos, who had gone down to 10 men midway through the second half when Oscar Duarte received a second yellow card. They had taken the lead early in the second half following a rare moment of quality finishing from Bryan Ruiz, whose first-time shot took the Greece defence by surprise. As Greece pressed home their numerical advantage in extra time, Costa Rica keeper Keylor Navas kept his side in the game, and then played a crucial role in shoot-out, saving from Theofanis Gekas.

Key moment: Greece’s dramatic injury-time equaliser by Sokratis Papastathopoulos. Just when it looked as if 10-man Costa Rica would hold out, Greece found a way past Costa Rica keeper Keylor Navas to take the match into extra time.

Man of the match: Keylor Navas. Costa Rica’s goalkeeper was the hero of the night, producing another outstanding performance to deny Greece on several occasions. And in the shoot-out, he made the crucial save that won the shootout to send his team into the quarter-finals

Matter of fact: Bryan Ruiz’s goal was the 19th by a captain at this tournament, a World Cup record.

Talking point: Unlike the shoot-out between Brazil and Chile, the spot-kicks from Costa Rica and Greece were all well-taken penalties. Suggestions that the exhausted players would be unable to perform in the shootout proved unfounded, with all nine penalties on target, and only one – from the unfortunate Theofanis Gekas – failing to find the back of the net.