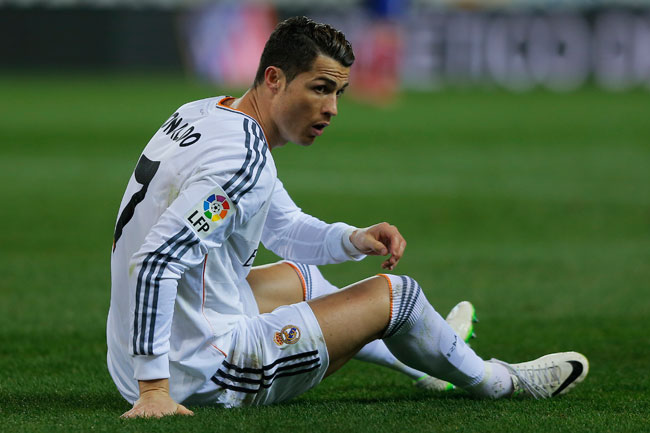 Atletico Madrid may face a fine after Cristiano Ronaldo was struck by a light in Tuesday’s Cup tie.

Atletico Madrid could face punishment after Cristiano Ronaldo was hit on the head with a cigarette lighter thrown from the crowd during Real Madrid’s 2-0 Copa del Rey semi-final second leg win at the Estadio Vicente Calderon.

The Portuguese forward fell to the ground when he was struck by the lighter as he walked off at the half-time break, but he was unhurt and returned to the fray after the break.

Under competition rules the host club could now be fined up to €30,000 and have their ground closed for one to three games if the incident is judged serious enough.

Ronaldo had moments earlier been booked for an aerial challenge on Javier Manquillo which saw saw the young Atletico right-back land awkwardly (warning: not for the faint-hearted).

“I think the consequences could be serious because it could have hurt a player,” Casillas told the Madrid website on Wednesday.

“There is always someone who tries to smear the image of a club like Atletico and it doesn’t reflect how the majority of their fans are,” added the Spain international.