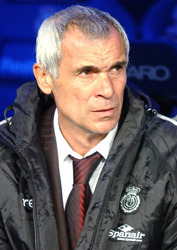 Hector Cuper has resigned as coach of the Real Mallorca.

The Islanders slipped to the bottom of La Liga following Sunday’s 1-1 home draw with Getafe, a result which means they have now gone nine games without a league win.

The club said they could not verify the decision but are expected to confirm his departure later on Tuesday.

His success at Mallorca earned him a move to Valencia, with whom he enjoyed further success culminating in the club reaching successive Champions League finals in 2000 and 2001.

He then replaced Marco Tardelli at Inter in 2001 and almost won the Serie A title the following season, before a last match defeat to Lazio ended their chances. Inter finished second again in 2003 but Cuper was sacked in October the same year after a poor run of form.

Cuper returned to Mallorca, replacing Benito Floro, who was sacked in November 2004 and helped the team avoid relegation last season.

However, this season they have won only four of their 23 league matches and, now with relegation a possibility, Cuper has decided to call it a day.

Coach Tomeu Llompart, who is already at the club, is expected to take temporary charge of first-team affairs.