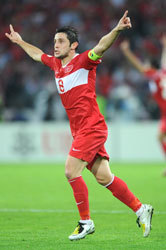 On a dramatic night in Geneva, Turkey came back from 2-0 down to beat the Czech Republic 3-2 and earn a place in the quarter-finals of Euro 2008.

The Czech Republic looked to be coasting into the last eight after goals from Jan Koller and Martin Plasil had given them a two-goal advantage midway through the second half, but Arda Turan pulled one back for the Turks, before a Petr Cech howler let in Nihat for the equaliser with two minutes remaining. Then, in a remarkable denoument to an extraordinary match, Nihat won the game for Turkey with just a minute of the 90 left.

There was still time for more drama when Turkish keeper Demirel Volkan was sent off for pushing Koller, and Turkey, having used all three substitutes were forced to use Tuncay in goal for the final few seconds.

There was little sign of the drama to come in the opening half an hour with both sides, aware that defeat would result in elimination, seemed overawed by the occasion.

The Czech Republic looked the more purposeful side from the off, with all the early chances falling the way of Karel Bruckner’s side. On 11 minutes Jan Koller, recalled to the side after being dropped for tha previous game against Portugal, stole a yard on his marker Servet, but was unable to direct his header goalwards.

Jankulowsi was enjoying plenty of space on the left flank and he provided a wonderful cross for Sionko who was denied by the outrushing Volkan.

Czech pressure eventually told, when Jan Koller headed home on 34 minutes. Grygera was allowed to roam down the right flank and the full back’s cross was met by an emphatic header by the towering striker, and although Volkan tipped the ball on to the bar, the ball dropped over the line.

The Turks were struggling to deal with Koller and the striker, came close to adding a second when he outmuscled his marker Servet, but was unable to direct his header from a Jankulowski free-kick.

Turkey were transformed after the break, and began to dominate possession as the Czech side seemed content to sit deep and hang on to their one-goal lead. However, on a rare break forward, Bruckner’s side managed to extend their lead when Plasil slid in at the far post to prod home Sionko’s cross. The goal was not without a hint of controversy with Turkey, who had been temporarily reduced to ten men by an injury to Emre Gungor, were furious that the referee had not allowed them to bring on a replacement.

The game looked up for Fatih Terim’s side, but to their credit they continued to take the game to their opponents and they were rewarded for their endeavours on 75 minutes when Arda converted Hamit Altintop’s pull back from the right.

Servet had a wonderful chance to equalise but he could only direct his header wide of the target from just four yards.

However, Turkey continued to press forward and on 87 minutes they scored an unlikely equaliser. The normally-reliable Petr Cech, under no pressure at all, spilled a harmless cross from Hamit Altintop and Nihat reacted quickest to tap into an empty net.

At this stage penalties looked inevitable, but the Turks had not read the script and they conjured up a wonderful winner on the stroke of full-time. Nihat broke the offside trap before curling a brilliant right-foot shot in off the underside of the crossbar from just outside the area.

The Czechs pushed forward in search of an equaliser and a long ball created mayhem in the Turkish penalty area with Volkan colliding with defender Emre Ssik, but fortunately for the Turks the ball was cleared to safety. After the incident Volkan squared up to Koller and pushed the Czech striker to the ground. The referee dismissed the keeper and Turkey were forced to play Tuncay in goal for the closing moments. It was a surreal conclusion to what had been a remarkable game.

At the final whistle the Czech players sank to the floor, scarcely able to comprehend what had just happened, while all around them delirious Turkish players enjoyed the moment.

Turkey will now face Croatia in the quarter-finals and if they can reproduce the spirit they showed tonight, then anything is possible.