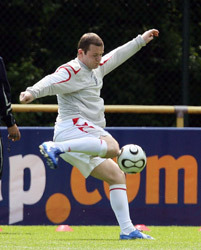 England striker Wayne Rooney has told coach Sven-Goran Eriksson he is 300% certain he will be fit to play in the World Cup finals.

The 20-year-old left England’s base near Baden-Baden and return to Manchester for the scan on his fractured metatarsal that will determine his participation in Germany.

“I have been saying for one month that I’m sure he will take part.”

Rooney left Germany at 0900 BST on a private jet and flew back to Manchester with England doctor Leif Sward.

The scan took place at the Whalley Range hospital at about 1200 BST with the results not expected until Wednesday evening.

The striker spent 25 minutes inside the clinic, accompanied by FA executive director David Davies and team doctors from Manchester United and England.

Eriksson will be informed how the recovery is progressing and whether Rooney can fly back to Germany and look forward to playing in Germany.

If he is declared unfit, his place will be taken by Jermain Defoe of Tottenham.

The deadline for a decision on whether to replace Rooney in the squad is Friday at 1400 BST, 24 hours before England’s opening game against Paraguay. There remains a possibility that a final decision on Rooney will be deferred until June 14, with Eriksson including the Manchester United striker in his final squad even though he may not yet have been given the go ahead to play by his club.

Eriksson has always been confident Rooney would make it since he suffered the injury in April, and the sight of the striker stepping up his training in the last few days, will have encouraged the England coach.

“I think he looks very good – but let the surgeons and the specialists have their say,” said Eriksson.

“I look forward to the point when we don’t discuss scans and Rooney’s foot any more.

“Very soon we will know what is going to happen about him but I have always said I think he will be ready.”