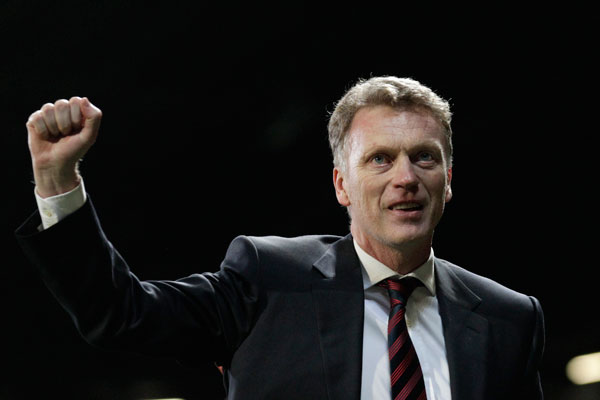 David Moyes thinks Manchester United are dark horses to win the Champions League after a somewhat fortuitous 3-0 victory over gift-bearing Greek outfit, Olympiakos, took them through to the quarter-finals.

If so, they are the blackest of dark horses. But, where there’s hope…or, as many Manchester United fans will be thinking this morning: it’s not the despair that kills you, it’s the hope.

Moyes has come under enormous pressure in recent weeks, with last Sunday’s humbling 3-0 home defeat to Liverpool – coming amid tales of player unrest –  prompting calls for him to be sacked.

Failure to overcome Olympiakos on Wednesday – United went into the second leg of the last-16 tie trailing 2-0 from the first game in Athens – was perceived  by many beforehand as the final nail in Moyes Old Trafford coffin. But the United boss gained much needed respite, thanks to a hat-trick from Robin van Persie.

It was the first time United had overturned a two-goal deficit in Europe for 30 years (see below) and, despite riding their luck on a number of occasions last night, Moyes is optimistic about their chances.

“I suppose we will be underdogs in the draw, but I genuinely believe this club is capable of winning it,” he said.

“If we show our capabilities, which we haven’t done too often, we can be a match for any team. After Sunday’s performance [the 3-0 home defeat by Liverpool], we needed to bounce back and we did it in style with this victory.

“It was a really good result in Europe, we came from two goals behind. It means we have got ourselves another two games in the Champions League, something we will really look forward to.”

Van Persie, who frequently appears to be auditioning for the role of the Grim Reaper in Moyes long and painful death march. was an unlikely saviour. The Dutchman scored twice in the first half, the opening goal a penalty, and added his third from a free-kick in the 52nd minute. A grateful Moyes paid tribute to the striker.

“To score a hat-trick in Champions League football is a big thing, only certain players in the world are capable of it and he is one of them,” he said. “He took his penalty and the free-kick well and Wayne [Rooney] did really well for the second goal [with the final pass]. He scored his hat-trick and really deserved it.”

Despite the result, Moyes, perhaps wisely, given the club’s erratic form all season, refused to assume that this would kickstart United’s campaign.

“We hadn’t played well in the first game – it was only another game, but I wouldn’t use the word you used, that’s for sure,” he said.

“I’ve said it before and it hasn’t ended up as we wanted, I don’t want to say this is the moment, but in the same breath I really hope it is. It is a work in progress and it will take time to get it exactly how we want it,” he said.

Moyes dismissed reports that the club’s owners were considering firing him. Although, if that was the case, he would be the last to know.

“I’m not feeling any pressure from inside the club, it’s coming from you people [the media].

“We know the job we have to do, it’s probably bigger than what I thought when I first came to the club.”

“There are stories of this player falling out, or that one falling out, but it’s rubbish. People are looking for reasons why we are not doing well but it is only because we have not been playing well.”

An assessment that no one would disagree with.

But for now, after a turbulent 9 months, Moyes should be allowed to bask in his side’s achievement. Who knows, this may turn out to be his very own Mark Robbins moment.

The last time United overcame a two-goal deficit in Europe was in 1984, when they defeated Barcelona in the European Cup Winners Cup quarter-final at Old Trafford.