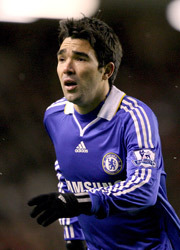 Deco has revealed that he hopes to leave Chelsea after this summer’s World Cup finals and return to his native Brazil.

The 32-year-old joined the Blues from Barcelona in 2008, signing a three-year deal at Stamford Bridge.

However, he has struggled to hold down first-team football and has not been a regular under Carlo Ancelotti this term.

Deco, who represents Portugal at international level but was born and raised in San Paulo, admits he would prefer to return to Brazil.

“I want to go back to Brazil,” he said in The Sun.

“I still have a couple of good years of high-level football in me but I want to be near my kids.”

He added: “Ideally, I’d like to go after the World Cup and I’ve been talking to Chelsea about it.

“It will all depend on Chelsea – if the club release me or let me go on loan.”