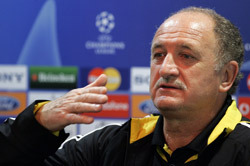 European Champions, Man Utd, head to Scotland tonight to face Celtic. See all the BestPrice betting on what’s set to be another historic clash.

Chelsea manager Luiz Felipe Scolari has revealed his concern after seeing his side beaten away to Roma.

The 3-1 defeat meant Chelsea’s lead at the top of Champions League Group A was cut to just one point with two games left.

“When you give away three goals you do worry,” he said after the 3-1 loss in Rome. “You need to think why was this and what we can do in our next game.

“We gave too many opportunities to Roma. We made too many mistakes, made wrong passes and had bad positions.

“Maybe we need to be more relaxed in future and realise that, at 1-0, the game isn’t finished. We’d had three or four good attempts in that first half. After that we used Didier [Drogba] with Nicolas Anelka and Salomon Kalou, but they closed us down very well. But that is not why we lost.”

“It’s true the group is open for all the teams,” added Scolari. “All of the groups are difficult. We lost one game and there are other teams behind us.

“But we have to win one game and we are there while other teams might need to win two games.

“We now have two chances to win against Bordeaux and Cluj.”

Scolari was critical of the decision to show Deco a second yellow card with 10 minutes to go for taking a free-kick too quickly.

“I think if one Roma player had done what Deco did they would not have been sent off,” he said.

“Nevertheless, I have good quality players in midfield to replace him for our next game.”

Scolari hopes Michael Ballack will be fit to replace the suspended Deco for Chelsea’s next Champions League game against Bordeaux.

“Maybe I will have players back like Ballack for that game,” said Scolari. “So I will still have quality in my midfield.”

European Champions, Man Utd, head to Scotland tonight to face Celtic. See all the BestPrice betting on what’s set to be another historic clash.