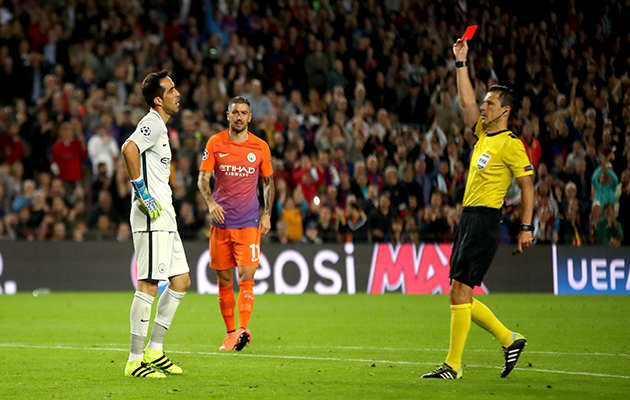 Pep Guardiola says he will never change his philosophy despite his Manchester City side suffering a 4-0 defeat at former club Barcelona, after they were reduced to ten men following the dismissal of goalkeeper Claudio Bravo.

Lionel Messi scored a hat-trick against City after the Chilean keeper was sent off for handling outside his box after a misplaced pass was intercepted by Luis Suarez.

“There will be no change. Until the last day of my career as a coach I will try to play from our keeper,” he said.

City were already trailing 1-0 when Bravo intercepted a through ball, but his pass only reached Suarez, whose goal-bound lob was handled by the keeper several yards outside his penalty area. With ten men, City were overrun, and further goals from Messi and Neymar completed the rout.

“Sometimes there are mistakes and sometimes you have to kick the ball out, but most of the time, when we play good, it starts from there,” added Guardiola.

“There will be no change [of goalkeeper]. It stays the same. Football is a game of mistakes. He knows what he did. He has a lot of experience and he’s one of the best goalkeepers in the last 10 years. I don’t have doubts about him. He’s disappointed but he will learn from that.”

The 45-year-old said his side needed more time to be capable of challenging at Barcelona’s level.

“We came here and played with huge personality but it is always difficult to play Barcelona with 11. With 10 the game was over. Until then the game was open.” 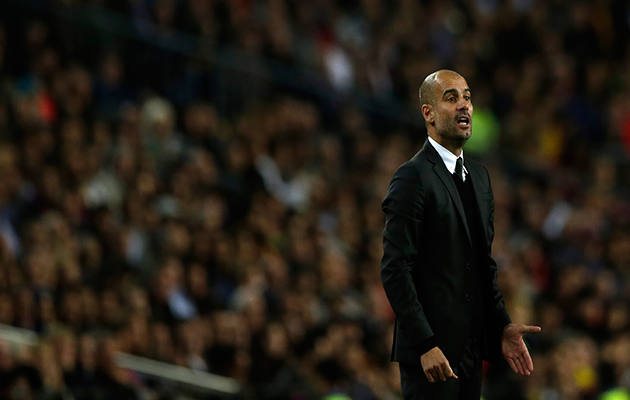 Pep Guardiola watches on helplessly as his side are taken apart by Barcelona.

Guardiola felt that the sending-off was the turning point. City were in the game at 1-0 at that stage but, with 10 men, they were unable to compete against a clinical Barcelona side.

“Until then the game was open,” said Guardiola. “Up to that point there aren’t many regrets. We’d created enough chances and arrived at the byline many times. We played with huge personality and we did create two or three clear chances. We are a new club, getting to know each other in a process.

“My perception is that we did well, knowing where we’ve come from and who we are. We’ve been brave. We started really well in the second half and then to play 10 versus 11 and to go 2-0 down [shortly afterwards] – it’s so complicated. When Messi, Neymar and Suárez attack you, it’s very complicated. They punish you.”

Bravo admitted his mistake had ended City’s hopes of getting back into the game.

“The sending-off changed the course of the game,” he said. “We were playing very well, but football is like that. It’s a game of mistakes and correct decisions. It’s just bad luck that I was the person who changed the game.”