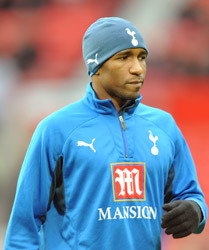 Jermain Defoe is set to play against Wigan on Sunday after finally completing his move back to Tottenham from Portsmouth.

There were a number of issues that was reported to have held up his move, but the Premier League have now received the 26-year-old’s registration and he is free to play at the JJB Stadium this weekend.

“We are delighted to welcome Jermain back to the club,” said Chairman Daniel Levy.

“We had previously been keen for Jermain to sign a new contract to extend his initial stay but at that point in time he felt it was in his interests to move on in order to guarantee himself more starts.

”I know the club is close to his heart and that he is thrilled to be back and to once again link up with Harry.”

Defoe credited Harry Redknapp and the club’s fans as the main reasons for his return to White Hart Lane from Portsmouth.

”It feels crazy,” he said. ”Since I left I’ve been getting texts and everywhere I go I bump into Spurs fans – it’s just great to be back.

”The fans were probably the main factor. I spoke to my cousin and he said ‘the fans love you there’. For me it is a strange feeling.

”When you get that many fans who appreciate what you do, it’s hard to find words how I feel about it. I want to start afresh, like it’s the first time, and hopefully score a lot of goals.”

Redknapp has hinted at using Defoe in attack with Roman Pavlyuchenko.

“This is the third club I have signed him for,” added the Spurs boss. “Because I know what a top class player he is as well as a proven goalscorer. I am pleased to have him here and I am sure the supporters are looking forward to seeing him back in a Spurs shirt.”