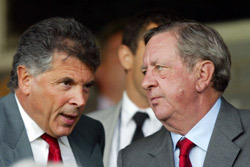 Former Arsenal vice-chairman David Dein has admitted that he still hopes to return to the Arsenal boardroom, after selling his stake in the club.

Dein, who resigned from the club’s board in April, sold his 14.5% stake in the club for £75m to a firm co-owned by Russian billionaire Alisher Usmanov.

Significantly, Dein has been named as the company’s chairman but says there is “no current intention” to mount a takeover bid.

“I’ve not lost my passion for the club,” he added. “My ambition remains to play an active role in Arsenal again.”

Dein left the board after it refused to back his plan for a takeover by American businessman Stan Kroenke. But, as chairman of Red and White, he says he is keen to increase the company’s stake in the club.

“Today’s announcement marks a significant step towards realising the vision I share with thousands of fans at home and abroad of making Arsenal the world’s number one football club,” he continued.

“I have not lost my passion for the club; indeed, it is greater than ever.

“I have been flattered by the generous offers I have received since April to work with other clubs, both in England and elsewhere.

“But there is only one club for David Dein and that is Arsenal.

“My immediate intention is to work with others to provide the financial resources necessary to turn the vision into reality.

“To provide these financial resources, Arsenal need new investors. The reality is that football is changing dramatically. A growing number of clubs are being funded by individuals or consortia that are prepared to invest previously unimaginable sums aimed at winning the game’s biggest prizes.

“Without new investors, I feel very soon Arsenal might not be able to compete successfully at the very top level, despite the fantastic work of Arsene Wenger.”

However, Arsenal’s managing director Keith Edelman says the club’s shareholders had no intention of selling their stake.

“We are in a very good position, we realise David has sold his shares to Red and White owned by Mr Usmanov, we note that but don’t believe it changes anything for Arsenal FC,” said Edelman.

“The current shareholders on the board control over 45% of shares and we believe the way the club is being run and the financial strength of the club will come through.”

“The club is in a very good position, and the stadium is producing very large cash balances for us.”