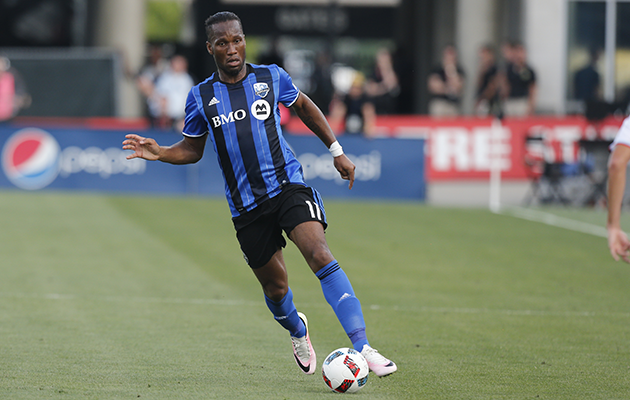 Didier Drogba has avoided suspension after he refused to accept a place on the substitutes’ bench, Montreal Impact president Joey Saputo has revealed.

Montreal coach Mauro Biello said Drogba refused to play rather than start on the bench before Sunday’s 2-2 draw with Toronto FC, and the striker was then left out of Biello’s matchday squad.

Saputo confirmed that he called a meeting with Drogba and Biello after the match to clear the air, and said the pair has resolved their differences.

“I’m happy to announce that the situation has been resolved to the club’s satisfaction,” he said. “Didier has accepted to assume the role that the coach sees fit as well contributing to the success of this club.”

Under terms of the league’s collective bargaining agreement, Drogba will be sanctioned for missing a team activity without permission. But the club has not chosen to ban him for Sunday’s final regular-season game against the New England Revolution.

“He will be fined as per the league rules,” Saputo said. “There’s no reason for a suspension.”

Saputo admitted that Drogba’s reaction to being dropped had not been helpful, but said the incident was now forgotten.

“When he came to Montreal, Didier said that he came here to win, and he still has the same objective. Our main priority now is to focus on the last game of the year and the upcoming playoffs.

“With the players and leaders we have on this team, we are convinced that we can make a run at the MLS Cup. I still believe in Didier, and I still want Didier to come in and be that hero that he was last year.”

Drogba’s contract expires at the end of the season. The two-time African Footballer of the Year winner has 10 goals in 22 games this season. Last year he scored 12 in 14 matches including a hat-trick on his debut for the MLS outfit.