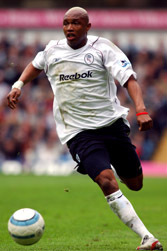 Man City will be hoping to follow-up their 3-0 win over Stoke in the Premier League back in October when the pair meet again this Saturday lunchtime.

Blackburn are set to complete the signing of former African player of the year El-Hadji Diouf from Sunderland.

Diouf moved to Sunderland at the end of last season but the two clubs have agreed a fee of around £2mthat will enable the Senegalese forward to be reunited with Sam Allardyce, the Blackburn manager.

“He (Diouf) can play a few positions, down the right, down the left, as well as along the front,” Allardyce added. “I’m hoping he can come and give me the kind of performances he gave at Bolton.

“He is in the prime of his career, so hopefully we will get that sorted today and get him in the squad (to face Tottenham) tomorrow.”

Diouf, 28, cost Sunderland £2.5m but did not made as big an impact as hoped for at the Stadium of Light. He started 13 matches for the club and come on as a substitute three times but failed to score in any of his appearances.

Man City will be hoping to follow-up their 3-0 win over Stoke in the Premier League back in October when the pair meet again this Saturday lunchtime.