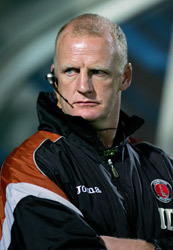 Charlton have parted company with manager Iain Dowie after only 12 Premiership matches.

Dowie replaced Alan Curbishley at The Valley in the summer but won only two league games and are currently bottom of the Premier League.

Despite their poor showing in the league, Charlton have reached the League Cup quarter-finals and will play fourth division Wycombe Wanderers next month for a place in the semis.

Dowie’s arrival at Charlton from neighbours Crystal Palace, was surrounded by controversy, with his former club serving him with a writ.

Charlton made the announcement on their official website, issuing a short statement which read: “The Addicks announced on Monday night that head coach Iain Dowie had left Charlton.

“The club will issue a further statement on Tuesday morning.”

Former boss Curbishley has already ruled himself out of a return to The Valley.

“I left Charlton for a new challenge,” he said. “Going back would not be good for me or for the club.”

“Going back there wouldn’t be right for me or the club.

“It doesn’t give me any pleasure to see them bottom of the league.”

Saturday’s 3-2 defeat at Wigan left Charlton at the bottom of the table, with only eight points.

Dowie took his first steps into management at Oldham. He led them to the Division Two play-offs in 2003 before moving to Palace in 2003. A fine run of form took them into the play-offs and saw them earn promotion. A short-lived stay in the Premiership saw the club return to the Championship where they again reached the play-offs before losing to Watford in the semi-finals.