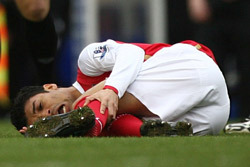 Arsenal’s Eduardo da Silva has forgiven Birmingham City defender Martin Taylor for the tackle that left him with a broken left fibula and dislocated ankle.

The Croatia international will be out of action for nine months after undergoing surgery on Saturday.

“I forgive Martin. It hurt like hell but I’m fine now. I know he did not do it on purpose,” Eduardo was quoted as telling

“I was horrified when I saw how my leg looked at first and wondered how it would all end. But I will be back.”

The striker, who turned 25 on Monday, was relatively sanguine about his situation.

“These things can happen in football. I see this as a risk of professional football,” he said.

The injury means Eduardo will miss this summer’s Euro 2008 finals, but his international manager, Slaven Bilic, refused to condemn Taylor.

“The injury made the tackle look bad,” Billic told BBC Radio 5 Live. “You see many tackles like that, almost every week.”

“That’s perhaps wrong for football but I’m sure Martin Taylor is a sportsman and he wanted to play the ball.

“On another occasion Eduardo could have received a worse tackle and got away without injury – everything went wrong but Eduardo knows Taylor didn’t do it deliberately.”

“The fact that (some commentators were surprised at the red card) tells the story itself – it was seen as just another normal tackle in a game of football where there is contact,” he said.

“Martin was horrified. There certainly wasn’t a big protest over the red card from him but he’s seen the damage that was done to Eduardo and I could see it in his face.

“Even if the referee had given him a yellow card I don’t know if he could have played on any way.”

“We’ve had to rally round Martin Taylor because he is mentally shattered by the whole experience.”