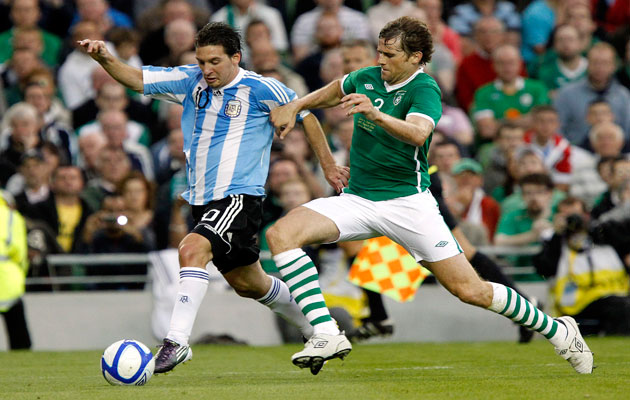 The Football Association of Ireland (FAI) have denied an astonishing claim that Irish players involved in a 2010 friendly clash with Argentina, were offered $10,000 apiece to avoid hurting Lionel Messi.

Argentinian newspaper La Nacion claims the offer was made as part of the deal that led to Argentina being the first international opponents for Ireland at the newly-built Aviva Stadium.

The FAI this afternoon released a statement refuting the allegations, which read: “The Football Association of Ireland completely refutes the allegations made about the Republic of Ireland v Argentina friendly match in La Nacion as baseless.

“The match in question was organised by Kentaro and announced by press release prior to the World Cup play offs in 2009. We are consulting our legal advisers in relation to the article, and will be taking further steps.”

The allegation was made in a comment piece by Ezequiel Fernández Moores and suggests that the idea came from Julio Grondona, the former President of the Argentine Football Association, who died in July of last year.

Moores also claims that the deal was related to the payment of €5million made by FIFA to the FAI as a form of compensation for Ireland missing out on the 2010 World Cup following the play-off defeat to France.

It seems that as part of that deal, Grondona suggested that they could play Argentina in a friendly in which the presence of Lionel Messi would be guaranteed.

Messi’s club, Barcelona, who were on a pre-season tour in Asia at the time, were reportedly unhappy and wanted an insurance payment in the event of Messi getting injured.

There is nothing to suggest that the Irish players received the payment.

Messi started the game, which was won 1-0 by Argentina, and emerged unscathed after being replaced by Gonzalo Higuain after 58 minutes.