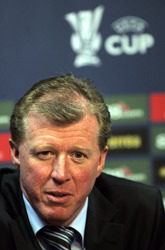 Italy only just scrapped through the Group stages, but they have never lost to Spain in a competitive tournament. Click here for the latest Spain v Italy odds!

“I’m delighted to be back in club management and looking forward to meeting staff and players,” McClaren told BBC Radio 5 Live.

“I’m looking forward to the challenge of playing in the Dutch league and the Champions League qualifiers.

“I noted from the first meeting with chairman Joop Munsterman and other people at the club that they were very co-operative.

“It’s an exciting time for the club, they were very successful under Fred Rutten (now at Bundesliga side Schalke) and I cannot wait to start.”

“He also told me that FC Twente is a fantastic club and that I would feel at home.

“I am excited to be working again at a club that fits me well. I am looking forward to this new challenge.”

The chairman of FC Twente has previously admitted that some fans were opposed to the appointment.

“Ninety per cent of fans think why him? But he is used to working with top players,” said Joop Munsterman.

Twente finished fourth last season to secure a place in the Champions League qualifiers for the first time.

McClaren, who has managed Middlesbrough and was number two to Sir Alex Ferguson at Manchester United, has not worked since being fired by England in November after failing to secure a place at Euro 2008.

Italy only just scrapped through the Group stages, but they have never lost to Spain in a competitive tournament. Click here for the latest Spain v Italy odds!