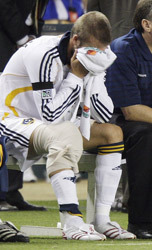 Sir Alex Ferguson thinks it is highly unlikely that David Beckham will convert the United States into a footballing hotbed.

Beckham is attempting to transform football into a mainstream sport in the States after joining the Los Angeles Galaxy in July.

However, ankle and knee injuries have restricted his impact thus far, but even a fully fit Beckham would be unable to overcome the problems the sport faces in the United States, according to Ferguson.

“It is difficult with David going there. I don’t know what kind of impact he can make,” Ferguson told an audience at the Citizens Theatre in Glasgow. “David Beckham himself can’t change the whole country.

“In European soccer, and especially in British soccer, you can travel easily,” Ferguson said.

“If you are in Boston and need to go to Los Angeles, it’s a six-hour flight. Supporters don’t travel, so you are missing that rivalry between fans.

“To make it substantial you would have to go regional, but there’s not enough teams to have four strong leagues.”

Ferguson also said that Major League Soccer is doomed because so many young players move to Europe to further their careers.

“What you have got in the States is that a lot of kids are playing football in the States and there is nowhere to go,” he said. “The best American players go to Europe very early, like Brad Friedel (at Blackburn), (Brian) McBride and (Clint) Dempsey at Fulham. That situation doesn’t help the American game.”

Ferguson coached Beckham throughout the England midfielder’s 11-year stay at United, but their relationship suffered when the former England captain became a major celebrity.

“He was never a problem until he got married,” Ferguson said. “He was a fantastic young lad. Getting married into that entertainment scene was a difficult thing – from that moment his life was never going to be the same.

“He is such a big celebrity, soccer is only a small part. The big part is his persona.”