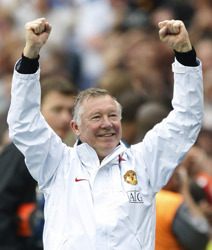 Rangers face Russian side Zenit St Petersburg in the UEFA Cup Final at the City of Manchester Stadium this Wednesday. Click here for the latest match odds!

Sir Alex Ferguson has won the League Managers’ Association manager of the year award after leading Manchester United to the Premier League title.

“It is a tremendous honour that my fellow managers should deem me worthy of this award,” said Ferguson. “I’m very proud to receive it.”

The Scot, who has been in charge at Old Trafford since 1986, also received the award in 1999 when he ledUnited to a Premier League, Champions League and FA Cup Treble.

Ferguson old will take United to the first all-English Champions League final against Chelsea on 21 May.

And he is confident that clinching the title ahead of Chelsea on Sunday will give his side a lift his side ahead of the Champions League showdown in Moscow.

“The mood generated by the win puts us in a very confident position,” added Ferguson.

“I expect my players to have the ability and confidence to play on the biggest stage in the world; of that I have absolutely no doubt.”

Speaking of the final, Ferguson admitted that he faces a major selection headache in Moscow.

“I’m travelling to Moscow with 26 fit players, that’s unheard of in my time,” he told Sky Sports News.

“But it gives us an incredible chance.

“It makes it difficult for me. I think picking the team will be easier than picking the substitutes.

“I’m going to have to leave some fantastic players out of the squad completely next week, which I won’t enjoy doing, but something has to be done.”

Rangers face Russian side Zenit St Petersburg in the UEFA Cup Final at the City of Manchester Stadium this Wednesday. Click here for the latest match odds!