After 22 months and scrutiny of more than 2m documents FIFA’s three-pronged internal investigation into corruption among its elite has ended in the dull thud of anti-climax.

A formal statement to confirm the wrapping-up of inquiries means all responsibility for further action rests with the Swiss authorities.

The failure of the latter’s own analysis of the same evidence, enhanced by bank account trawls and homes raids, to generate formal charges suggests the Swiss investigation may also fizzle out.

Only two only individuals have been placed even under formal criminal investigation: Sepp Blatter, the disgraced and banned former president of the world football federation, plus sacked and banned ex-secretary-general Jerome Valcke.

This writer understands that concerns over misuse of funds and conflict of interest centres not on other staff but largely on former members of the derided executive committee. These were all foreigners who are not expected to set foot in Switzerland any time soon again, if ever.

Many individuals refused to answer questions from Quinn Emanuel Urquhart & Sullivan on legal advice concerning knowledge that FIFA’s lawyers would pass on all their findings to the OAG.

The conclusions of the internal inquiries are likely to home in on how the old-fashioned committee system, common to many sports bodies, rendered FIFA vulnerable to plunder.

FIFA president Gianni Infantino has seen the reports but they will not be published for legal fears of upsetting Attorney-General Michael Lauber while his own work is ongoing.

The OAG had already taken a dim view of publication in Germany of a national federation review into its own 2006 World Cup cash scandal.

Swiss authorities objected that this may have compromised its own investigation. FIFA does not want to run this risk for fear of jeopardising its own critical ‘victim status’ with the authorities in both Switzerland and the United States.

This writer understands that none of the 80-plus staffing cuts over recent months arose from information obtained by FIFA’s lawyers. 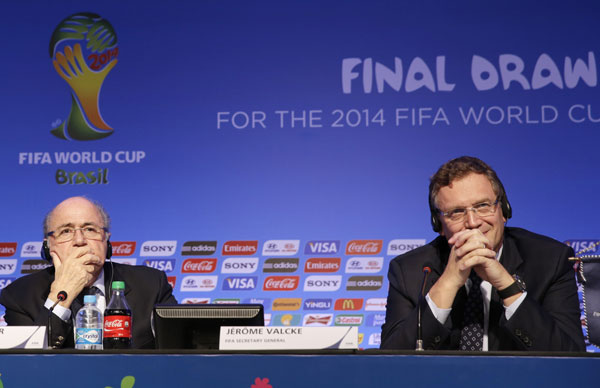 Allegations against Blatter concern an irregular payment of $2m to former UEF president and FIFA vice-president Michel Platini as well as conflict of interest and misuse of authority in the award of a television contract to Jack Warner, the then CONCACAF leader.

Frenchman Valcke was sacked and banned for 10 years by the FIFA ethics committee over allegations concerning World Cup ticketing. Both he and Kattner were later revealed to have benefited from excessively lucrative contractual arrangements. Kattner was sacked and is suing FIFA for wrongful dismissal.

The twin-track legal assault exploded the cosy little world of high-level corruption in world football on May 27, 2015. That was the day which saw the sensational detention of seven senior officials at the Baur au Lac Hotel in Zurich on the eve of FIFA Congress.

Later that day the scale of the FIFAGate investigation being run by the US Department of Justice was revealed by then Attorney-General Loretta Lynch.

Two companies and more than 40 individuals, including four former FIFA vice-presidents, have been indicted for skimming more than $200m from the game in the Americas through bribes and kickbacks

Most have reached guilty plea-bargain deals with the US authorities. Sentencing begins in June. Trials of a dozen who still deny wrongdoing are due to open in November.

Brazilian confederation president Marco Polo del Nero and a notorious predecessor, Ricardo Teixeira, cannot be extradited from Brazil because of a protective clause in the national constitution.

Uruguayan Eugenio Figueredo is under house arrest while on trial over prior corruption charges in his native Montevideo; marketing executive Alejandro Burzaco is contesting extradition from neighbouring Argentina.

Many of the above have been handed bans from football for between two years and life. On that basis it is not expected that the conclusions of the internal inquiry will lead to new or renewed action by the FIFA ethics chamber.

A summarising lawyers’ report will be published later next month but will not name names.

Infantino, who has cleaned out almost all senior staff from the Blatter regime in trying to restore FIFA’s credibility, may have mixed feelings about the conclusion of the internal inquiries.

The 47-year-old Swiss will be relieved, on the one hand, that there is no more dirty linen being laundered in public right now.

However, he may be dissatisfied that the lack of published detail means critical speculation will drag on and compromise his stated ambition to end the long-standing culture of corruption.