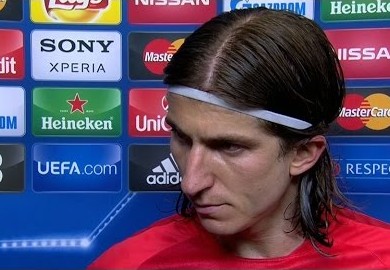 Diego Simeone and Atletico Madrid left-back Filipe Luis were both furious with German referee Felix Brych’s performance during their  side’s 2-1 defeat to Barcelona in the first leg of Spanish side’s Champions League tie.

Fernando Torres received two bookable offences within the space of 10 minutes after he had put Atletico in the lead.

Simeone and Luis could not contain their dismay, as Luis Suarez could have seen red for a wild kick at Juanfran in the first half or a clash with Filipe Luis after the break. Suarez scored a brace for Barcelona to win the contest.

When Simeone was questioned whether Torres should be blamed for his side’s loss, he was adamant that he wouldn’t and hinted that he was unhappy with the referee’s performance.

“Certainly not Torres,” he responded, before hinting far more strongly that he was unhappy with the performance of German referee Felix Brych.

“I can’t say what I want… I need to think about what I’m saying so I don’t say anything I shouldn’t,” he said post-match when asked about incidents involving Luis Suarez.

“There were more than two,” he said.

Filipe Luis however, was more forthright in his assessment of Brych and said that Barcelona receives preferential treatment:

“The sending off is totally unjust and changed the game.

“Barcelona are protected. When you play against them you realise that they are a very powerful club.

“You realise the fear when Barcelona could get knocked out. It would hurt UEFA a lot.

“Against Real Madrid there was a similar moment [from Suarez]. I don’t know what they have to do for someone to send one of them off.

“Fernando, two fouls, two cards. The referee has not seen many Madrid-Barcelona derbies. There would be eight red cards.

“I don’t know what [a Barcelona player] has to do to get sent off.

“They sent me off [in La Liga fixture] correctly, but the other team isn’t treated the same. That’s what hurts.”