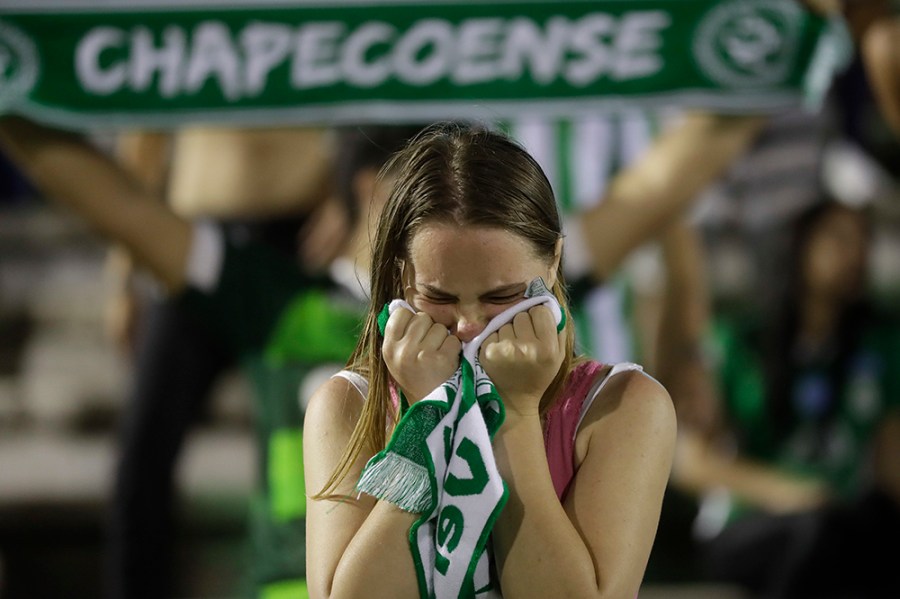 Hundreds of Chapecoense fans have gathered at the club’s stadium in Chapecó, Brazil, to mourn the players and staff killed in a plane crash in Colombia.

Members of the crowd wore the team’s colours and offered prayers to those who had died in the crash.

“I’m very sad to receive the news that came through this morning. It was completely unexpected. We’re gathered at the stadium, welcoming people who are affected, people who love Chapecoense,” vice president Ivan Tozzo told SporTV.

“The pain is hard to take. Chapecoense was the biggest source of happiness in the city. Many in the town are crying.” 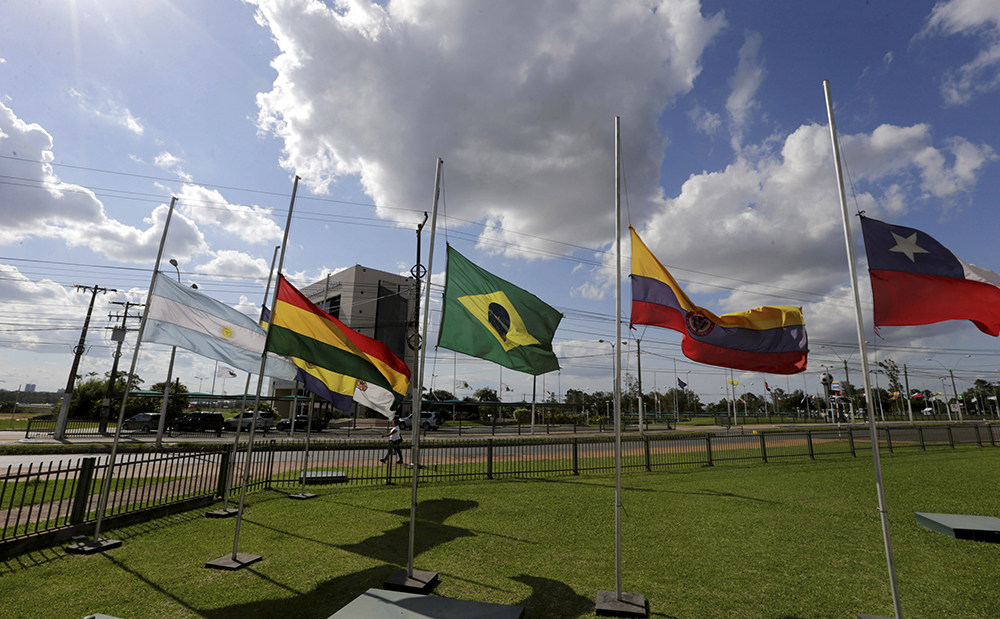 The flags of Brazil and the member countries of the South American Soccer Confederation (CONMEBOL) fly at half staff, paying tribute to members of Chapecoense soccer team in a plane crash in Colombia, in front of the headquarters in Luque,Paraguay November 29, 2016. REUTERS/Jorge Adorno
Picture Supplied by Action Images

Chapecoense were preparing for the final of the Copa Sudamericana, the biggest match in their history after a remarkable rise through the ranks of Brazilian football. It was less than a decade ago that the club failed to achieve promotion to the national league fourth division. Three seasons ago they were promoted to Serie A and this week were on the threshold of their first continental final.

Brazil’s top-flight football teams offered to loan players to Chapecoense for next season. The teams also asked the Brazilian Football Confederation (CBF) to give Chapecoense a three-year exemption from relegation.

“It is the minimum gesture of solidarity that is within our reach at this point in time but it is borne of the sincerest desire to reconstruct this institution and that part of Brazilian football that was lost today,” the statement said.

Meanwhile, Atletico Nacional, Chapecoense’s opponents in the Copa Sudamericana final, have asked that the trophy be awarded to the Brazilian side. 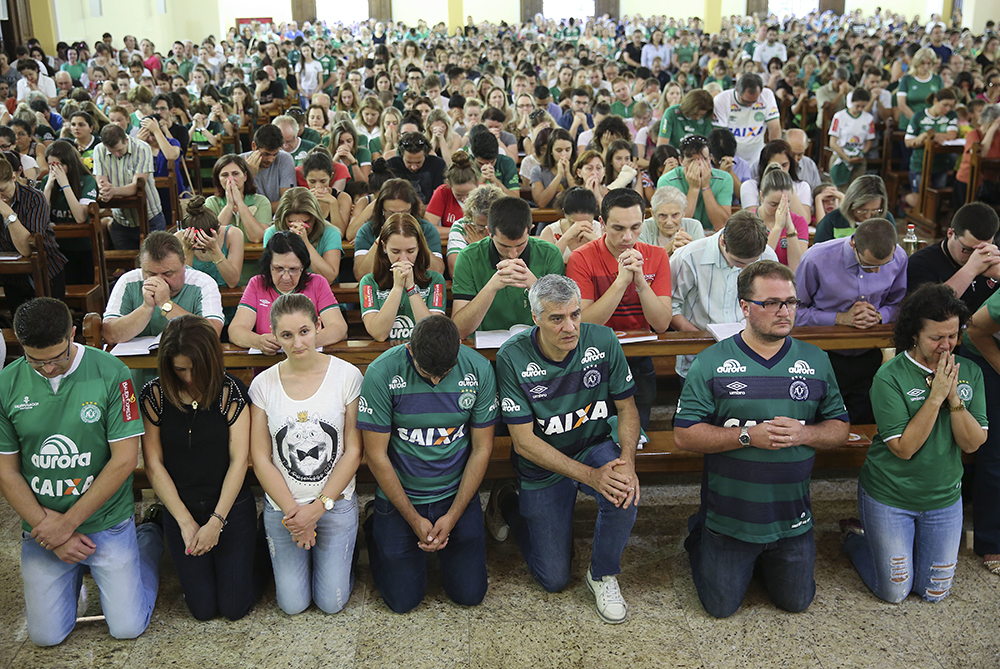 The Brazilian government has declared three days of national mourning for those who died.

The victims included more than 20 Brazilian sports journalists as well as a similar number of players and club officials.

Brazil’s President Michel Temer announced the mourning period and offered his condolences to the friends and families of those who died.

He noted: “I express my solidarity at this sad time when dozens of Brazilian families have been affected by tragedy.

“We are offering every form of help and assistance that we can to the families. The air force and foreign ministry have been put to work. The government will do everything possible to relieve the pain of these friends and families of Brazilian sport and journalism.”

The Brazilian football federation (CBF) has postponed all matches for a week, including the final round of the Serie A national championship and the Copa do Brasil final between Gremio and Atletico Mineiro. 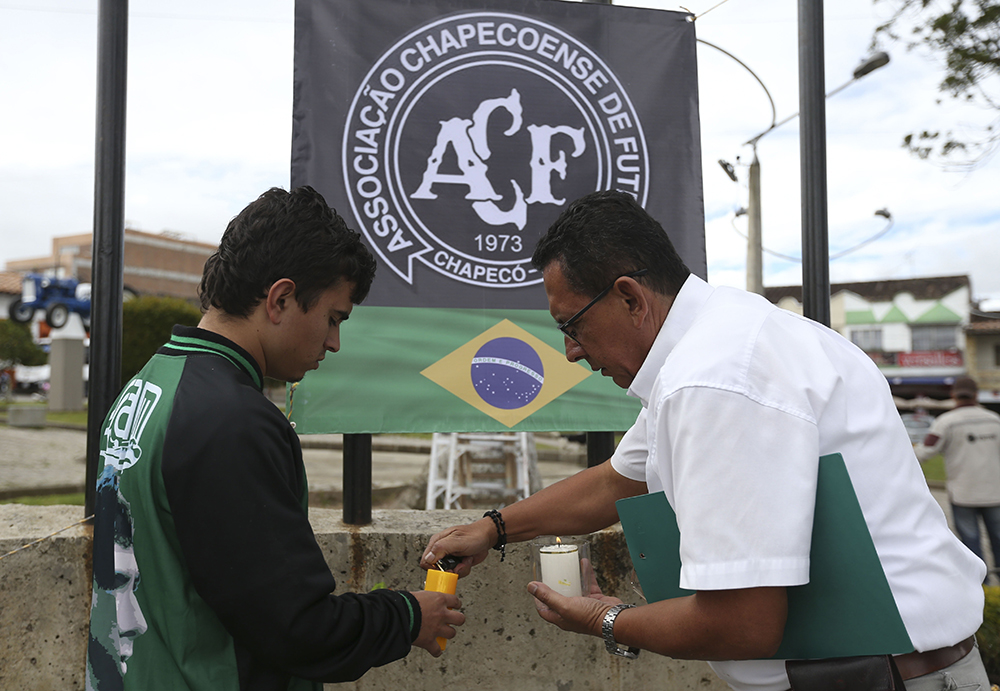 Fans of Colombia’s Atletico Nacional light candles in front the Chapecoense soccer team logo in La Union, Colombia, Tuesday, Nov. 29, 2016. A chartered plane that was carrying the Brazilian soccer team Chapecoense to the biggest match of its history crashed into a Colombian hillside and broke into pieces, killing most of the passengers, Colombian officials said. (AP Photo/Fernando Vergara)

FIFA president Gianni Infantino has led the football world in expressing his “shock and deep sadness” at the plane crash.

Infantino said: “This is a very, very sad day for football. We are so sorry to hear about the airplane crash in Colombia, it is shocking and tragic news. At this difficult time our thoughts are with the victims, their families and friends.

“FIFA would like to extend its most heartfelt condolences to the fans of Chapecoense, the football community and media organisations concerned in Brazil.”

FIFA followed up its initial statement with a further tribute to the journalists who died in the crash.

A FIFA statement said: “The Brazilian journalists on the plane that crashed in Colombia were both colleagues and friends of FIFA’s Communications staff. We are shocked and deeply saddened by the tragic news and we would like to extend our deepest condolences to the families and friends of those who lost their lives on their way to cover the final match of Copa Sudamericana.”

Media representatives reported to have died: